“If you can get the King to visit your bed chamber on the first evening, you’ll be perceived as a great success.” This is the advice handed down to Caroline Mathilde (Alicia Vikander) by her mother before she embarks on her journey from England to marry the then Danish King, Christian the VII (Mikkel Boe Folsgaard) at the beginning of Nicolaj Arcel’s period drama, A Royal Affair (En Kongelig Affære, 2012). It’s not the presence of her husband in her bedroom that defines her time as Queen of Denmark however, but that of his trusted physician advisor, Johann Friedrich Struensee (a commanding Mads Mikkelsen).

Based on the real story of Christian VII’s reign, Caroline arrives in a moodily shot Denmark to find one of the most conservative states in Europe and a new husband that is plagued by mental illness and largely ignored by his own council. Despite providing an heir to the throne, Caroline’s life is an unhappy one; that is until the arrival of the German physician Struensee. Finding a common ground in the writings of the enlightenment – which is yet to permeate Denmark’s borders – the two fall in love, and, at the same time convince Christian to begin implementing radical social reforms earning praise from Voltaire himself. Their fling, however, cannot remain a secret forever. 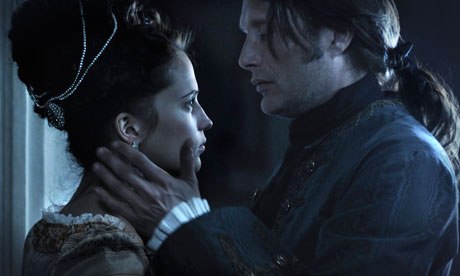 Taking place in lavish sets filled with beautiful period detail, A Royal Affair is an impeccable production from start to finish. The performances from the three leads are all of the highest quality with Mikkelsen as reliable as ever; Folsgaard’s performance does threaten to be a little too broad and comedic during the opening exchanges but he settles into it soon after and projects a complex and empathetic portrait of the king. Between them all, they manage to create a sense of affection and admiration for all of the characters making the threat of the secret being revealed a compelling hook.

Caroline and Struensee’s relationship is expertly intertwined with the coming of the enlightenment to the otherwise traditional and religious Denmark. The social advancement and their love affair are so enmeshed that it becomes painfully apparent that there is more at stake than the privileged personal positions of the two lovers. In the mean time, the King’s ambitious step-mother, Juliane Marie (Trine Dyrholm), and scheming politician, Ove Hoegh-Guldberg (David Dencik), make for suitably unlikeable antagonists.

The complex nature of the relationships and the close correlation between the affair and the welfare of the state mean that there is a lot more going for A Royal Affair than its billing as a European period romance would initially suggest. Those not normally inclined to watch this sort of thing may be pleasantly surprised by how irresistible it remains throughout.