In recent years, Tim Burton’s cinematic output has been more than a little disappointing. Revisiting his own source material with 2012 stop-motion animation Frankenweenie 3D (based on a 1984 short he made whilst working for Disney), he manages a partial return to form with a feature that possesses the magic we know and love him for. When young Victor Frankenstein’s (Charlie Tahan) beloved dog Sparky is accidentally killed the despairing teen turns to his other passion – science – after being inspired by his looming, Vincent Price-esque science teacher Mr. Rzykruski (Martin Landau).

Eager to bring his beloved pup back to life, Victor resurrects Sparky through the power of lightning. Reunited again with his cadaverous canine, the world seems back to normal – that is until his school friend Edgar ‘E’ Gore spreads the word, bringing chaos to the small town of New Holland. As a riff on Mary Shelley’s Frankenstein, Burton has stripped the story of its dark musings on the nature of life and death and created a fairytale story that borrows from Hollywood’s prolific heritage of macabre monsters, and elements of his own previous work. 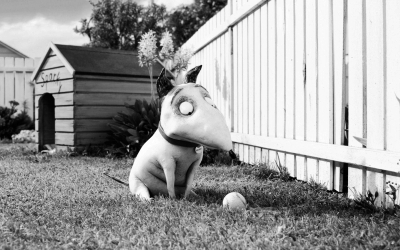 As well as introducing individuals imitative of characters from Frankenstein, there are also overt nods to Universal’s The Wolfman (1941) and The Mummy (1932), along with less well-known characters such as Bride of Frankenstein’s (1935) Dr. Pretorius. These provide an enjoyable homage to the horror of yesteryear, but there is a touch of Burton’s own works – namely The Corpse Bride (2005) and The Nightmare Before Christmas (producer, 1993) – in production design, a key element of Burton’s ghoulish aesthetic.

Whilst all these notable nods are pleasing for the older viewer and lovers of horror, it’s ultimately the heart-warming and charming story about a boy and his best friend who happens to be a dog, that is at the centre. As the plot unfolds at an easy, yet always entertaining pace, Burton goes back to the basics of good storytelling, absent of the over the top, clumsy productions of the past six years.

Whilst not quite of the same calibre as his very finest macabre works – Ed Wood (1994) or Edward Scissorhands (1990) are clear high watermarks – the joyfully culty Frankenweenie 3D entertains throughout with magical fantasy charm, providing a fitting homage to the movies (both his and those of others) that made Burton the director he is today.