High hopes were held for Palme d’Or nominee Rust and Bone (2012) prior to its Cannes competition premiere. The fourth feature from acclaimed A Prophet (2009) director Jacques Audiard, starring Academy Award winner Marion Cotillard and rising Belgian star Matthias Schoenaerts, Rust and Bone emerged divisive, splitting audiences between those who found pleasure in its hard-edged melodrama and those who simply didn’t care for it. Riding into cinemas following a Best Film award win at this year’s London Film Festival, Audiard’s latest could well have the same effect on the UK’s arthouse contingent.

Cotillard stars as Stéphanie, a vivacious orca trainer residing in a tourist-frequented town on the sun-drenched French Riviera. After a freak accident at work leads to a double amputation, Stephanie descends into the deepest recesses of depression, saved only by her largely amicable ‘it’s complicated’ relationship with local street brawler (and single father) Ali (Schoenaerts). Ali himself is finding life tough, torn between raising his young son and making ends meet – be it through organised illegal bouts or more nefarious means. Together, the pair struggle to overcome the constraints and restrictions that fate and misfortune have placed in their paths. 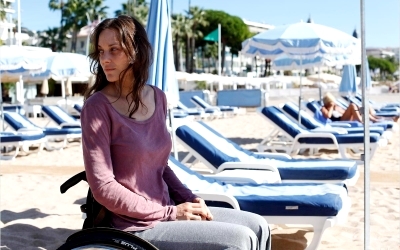 In a stylistic reversal of yet another of this year’s most divisive French fancies – Christophe Honoré’s 2011 musical Beloved – Audiard has constructed an overtly melodramatic narrative of lost limbs and fatherly strife and played it relatively straight. Such a dichotomy can (and has) lead to accusations of emotional manipulation and concerns over the jarring nature of such a hybridic mash-up. Yet Rust and Bone somehow manages to power through, enduring the slings and arrows (or should that be amputations and spinning teeth) of outrageous fortune, its cast of characters emerging from the dark into the bright lights of redemption.

Cotillard handles what could have potentially been an extremely difficult (and overtly showy) role with elegance and poise, her birdlike grace lost forever in one cataclysmic moment of union between metal, whale and flesh. Resigned to spending her days chair-bound in her darkened apartment, Stéphanie is lifted (often literally) by her burly confident Ali, with Schoenaerts arguably stealing proceedings as the bullish giant. Mutual symbiotic dependency, rather than conventional ‘love’, is what ultimately draws these two lost souls together, a union born not just out of reciprocal sexual desire, but also out of extreme circumstantial hardship.

There is more than a little of Marcel Carné’s Le Quai des Brumes (1938) at work here, following with voyeuristic (yet never sadistic) delight the lives of French society’s cast-offs, left to scrabble in the dirt for even the smallest glimmer of hope. Audiard’s Rust and Bone certainly won’t be to everyone’s taste, but those who find themselves whipped up and ensnared in its melodramatic whirlpool may well come out of the other side feeling cleansed and thoroughly satisfied.