To say that Excision (2012) – the new horror from first time writer and director Richard Bates Jr., an expansion of his previous 2008 short – is disturbing, would be putting it mildly. With a cast headed by the wonderful AnnaLynne McCord and Traci Lords, and featuring cameos from John Waters and Malcolm McDowell, this film’s startling surrealism is shocking and entrancing in equal measure. Female protagonist Pauline (McCord) is not what you would call a happy teen. Living in a ‘picture perfect’ American suburbia with her domineering mother Phyllis (Lords), browbeaten father Bob (Roger Bart) and younger sister Grace (Ariel Winter), life for Pauline is a living hell.

Due to her social awkwardness, she is also ostracised by her teachers and peers at school. However, all of this means little to Pauline, for she is above such trivial things as public acceptance. She has aspirations to be a brilliant surgeon, and in the process save her terminally ill sister’s life. If she could only rid herself of the horrific nightmares which plague her and of course the inferior people around her, she might just get somewhere. 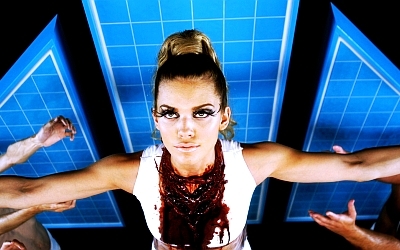 This is a film of two extremes, the main being the startling aesthetics of Pauline’s psychosexual nightmares which suddenly inter-splice her everyday normality when you least expect it. The less said on this matter the better as, not only is the imagery hard to describe in words, but it is also the surprise of its bizarre originality which is part of Excision’s fun. There is more than a hint of Carrie (1976), both in Pauline’s relationship with her hyper-religious mother and interaction with her classmates and teachers. Yet this is approached with such verve that it appears more reverential homage than copycat pastiche.

Excision is also an exploration of the intricate sociological games which people play and which form part of everyday life. Scenes like those where Phyllis accuses Pauline of being childish when she refuses to put her seat belt on in the car, yet proceeds to go through the age old parent/child ritual of asking ‘how was your day’ is a perfect example of the social mores and false interest which make up so much of human existence yet, when analysed, are as unsettling and nauseating as much straight on horror.

Bates Jr.’s razor sharp script proves that though the horror genre is often dismissed as inferior to much in mainstream cinema, it can be equally clever and insightful under the right guidance. The dialogue simply fizzes as when for instance Pauline admits to God that she has not read the bible in its entirety as she finds it hard to commit time to reading a book which has received so many ‘mixed reviews’. Excision is fresh and deliciously subversive, yet more importantly has that undefinable element all too often missing from modern horror cinema – it leaves the viewer satisfied yet, at the same time, wanting more.