★★★☆☆
One of the most influential acts of the grunge era, second perhaps only to Kurt Cobain and his mighty Nirvana in terms of their capacity to eat up column inches, Hole were a true product of their time – a pro-feminist, angsty collective that gave rise to the über ego that is Courtney Love. One of the band members to live under the shadow of Love was drummer Patty Schemel, whose remarkable rollercoaster ride through fame, drug addiction and sexual reawakening is the subject of P. David Ebersole’s crudely made, yet deceptively compelling rockumentary Hit So Hard (2011), released on DVD this week following a limited theatrical run.

When Cobain and Nirvana first burst onto the global music scene in 1991, Schemel – the acclaimed drummer of Hole – was in the middle of all of it. One of few openly gay women in the American music industry, Schemel was the dependable backbone of a perilously volatile, anarchic group, and it wasn’t long before drink, drugs and other vices began to take their toll on the respective band members. Following the death of both Hole bassist Kristen Pfaff and Cobain, Schemel and Love descended into cocaine and heroin abuse, which proved destructive both personally and for the entire collective. Capturing Hole’s ascent to stardom via a video camera acquired by Schemel just before Hole’s infamous Live Through This world tour, Hit So Hard provides a telling snap shot of a pivotal moment in rock history. 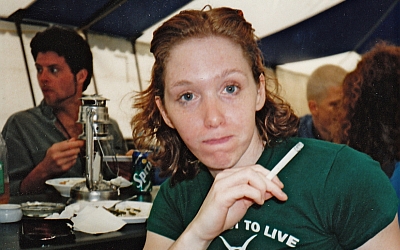 It would be fair to say that aesthetically at least, Ebersole’s latest feature feels somewhat lacklustre. Part of this, unavoidably, is down to the quality of original raw footage garnered from the period, shot handheld by Schemel herself backstage, on the band tour bus or on location at shows. However, Ebersole also makes some bizarre stylistic choices in an attempt to tell Patty’s story, which only serve to jar and alienate. Choice quotes often appear on screen moments before being regurgitated verbatim by the designated talking head, whilst MTV-esque intertitles date the film quite unfavourably. Yet, as with so many documentaries of its ilk, Hit So Hard delivers where it counts most – in the content department.

Ebersole has successfully managed to assemble a veritable ‘who’s who’ of grunge royalty for his latest film, and impressive roll call of talking heads that help to provide several multi-layered, multiple perspective breakdowns of the key moments of an era that – for Schemel especially – is at best hazy. The overawing Love inevitably steals much of the limelight, bitching and chewing her way through the history of Hole (like some deranged, grunge-addled Cookie Monster) in her own inimitable way. The ying to Love’s yang, Schemel at least appears to have put her torrid past behind her, recalling her time with the band through a heady blend of nostalgia, heartache and apoplexy.

For Hole enthusiasts (stop sniggering), Ebersole’s ugly duckling is perhaps as definitive a text as yet constructed on the original, influential quartet – a scruffy, warts and all retrospective of both the band and Schemel’s involvement, as engaging as it is lackadaisical. In a year that’s already seen the release of such superior music docs as Marley, Sing Your Song, Searching for Sugarman and Crossfire Hurricane, Hit So Hard has nothing like the kind of crossover potential of the aforementioned, yet should still find a small and devoted rabble of admirers.

The bonus features include over 2 ½ hours of extra features, including never before seen home footage and bonus interviews, exclusive to the UK. In addition, the UK edition includes three additional featurettes including a running commentary by director P.David Ebersole and Patty Schemel.

Win a copy of grunge rockumentary Hit So Hard on DVD with our brand new competition. Follow this link to enter.