Writer and director David Ayer is best known for his hard-hitting cop dramas, responsible for both the critically divisive Street Kings (2008) and the more successful Training Day (2001). With his latest effort, End of Watch (2012), Ayer manages to bring a freshness to the buddy cop movie which, at its best, thrills and absorbs whilst painting a very human portrait of the daily lives of two LAPD officers. Best pals Brian (Jake Gyllenhall) and Mike (Michael Penã) are partners working the beat in South Central, LA, a notoriously dangerous area where gun-running, dirty money and narcotics are part of the daily lives of the neighbourhood’s residents.

The inseparable pair spend nearly all of their time together, both inside and outside of work, all of which is given plenty of screen time for the audience to invest in these well-rounded characters, credibly brought to life by the film’s stars. We witness their daily lives as ‘boys in blue’; arresting perps, jostling with gang members and chatting about their relationships with various women. The two men’s lives are changed irrevocably however when Brian and Mike arrest an individual who they believe to be just another small-time crook – only to discover that he is in fact a member of a dangerous Mexican crime syndicate. Seeking revenge, the sinister cartel put a hit out on the two cops. 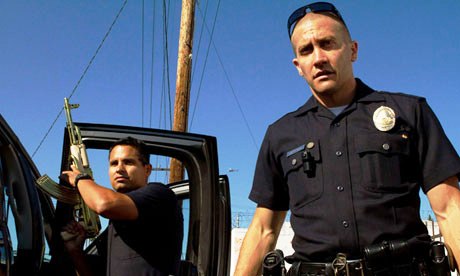 Ayer employs the now common found footage device for much of End of Watch, yet through mixing on board police tape, intentionally clumsy head-held sequences and traditional cinematic techniques alongside rapid cuts, the US director somehow manages to make it all feel fresh – for the most part. At times, the transitions between the various formats can become distracting, pulling you out of the narrative. However, the engaging story helps to cover over such cracks, successfully building sympathy with the two central protagonists, further adding to the drama during the action. The action sequences do veer towards the clichéd at times – particularly the final climactic shoot-out – but thoughtful editing choices and inventive camerawork still produce a tremendous sense of tension and peril.

Essentially, Ayer’s End of Watch is a bromance with grit, where moments of idle and even banal conversation provide a convincing human narrative to the wider backdrop of the war on drug cartels. At times, the characters are a little too clean-cut –  Brian and Mike are awarded medals for acts of bravery after conveniently stumbling on the right crime that will earn them brownie points with their superiors. Consequently, there are also attempts to balance this, such as the initiation of a fight with a hood behind closed doors or their occasional (mildly comical) disregard for authority. However, simply because their central friendship is so compelling, these issues fall by the wayside.

With End of Watch, Ayer has successfully brought something new to a tired genre by creating a credible tale of two friends who believe wholeheartedly in the job that they are doing (“To Protect and to Serve”, as it were). This focal ethos, mixed with gripping action sequences, make for a strong, if imperfect buddy cop drama.