A remake of the 1966 film of the same name starring Michael Caine and Shirley MacLaine, Michael Hoffman’s Gambit (2012) is a pleasantly old-fashioned transatlantic crime caper, given some welcome wit and verve courtesy of an adapted screenplay from Joel and Ethan Coen. Updated for a 21st century world of media moguls and mega-money, Colin Firth takes the lead in this knowingly light farce as plotting British art dealer Harry Deane, who plans to swindle his slave-driving boss Lionel Shabandar (Alan Rickman) by tricking him into buying a counterfeit version of a long-lost oil painting by French master Monet.

Pitched somewhere in between Peter Sellers and Dirk Bogarde, Firth’s Harry Deane is that most iconic of Englishmen – dapper, refined, yet far less in control of his fragile position in life than he’d like to concede. Hounded night and day by the growling Shabandar, Dean finally snaps, hatching a half-boiled scheme that involves recruiting the services of Texan cowgirl PJ Puznowski (Cameron Diaz), the staged inherent of Monet’s legendary Haystacks Dusk, liberated by her US marine grandfather from the Nazis during the Second World War. With the aid of his friend the Major (Tom Courteney), the con seems to be on. Yet predictably, for Deane at least, things never seem to run as smoothly as planned. 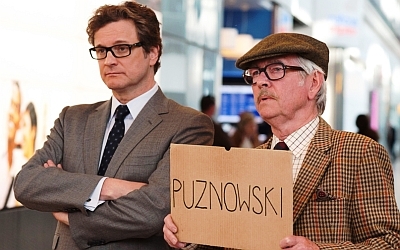 Those expecting a pitch black, darkly comic rendition of the ’66 original from the brothers Coen may well be nonplussed by this light and frothy offering. Fargo (1996) it most certainly isn’t, but neither does it aspire to by anything more than a faintly ridiculous romp through cultural faux pas and Savoy-based silliness (with a triplet of collie-riding monkeys thrown in for good measure). Gambit’s exuberantly anachronistic approach – whether it be in its costume design, score or its moments of screwball comedy – thankfully save it from being just another Ocean’s Eleven cast-off.

Commonly tarred with the same ‘bumbling Englishman’ brush as the inimitable Hugh Grant, Firth here finds time to flex his comic muscles, proving more than comfortable as the unfortunate Dean, whether scaling a London hotel or timidly fending off a fully-grown African lion. Diaz – surprisingly – also suits her ditsy cowgirl persona, before (somewhat predictably) proving that there’s a little more to PJ Puznowski than initially meets the eye. Smoothly rounding off this central triumvirate is Rickman, shaking off the mantel of Harry Potter’s Severus Snape and – quite literally in several scenes – content to let all hang out.

There’s little denying that Hoffman’s Gambit is, at times, remarkably unremarkable. Its humour is often lashed on with the broadest of strokes, its pithy one-liners familiar to anyone versed in the culture-clash British comedies of the Sixties, and its overarching plot contrived almost to the point of breaking point. Yet, thanks to the talent involved, there’s still much to admire, from the broken and battered Deane’s persistent sense of pride through to Courteney’s lovingly loyal Major. A gamble on Gambit may not come off for everyone, but the rewards are there for a lucky (and persistent) few.