Somewhat unfortunately released in cinemas at a time when sympathy for the Israeli military is perilously low, Eytan Fox’s melancholic romance Yossi (2012) – the belated follow-up to his own Yossi and Jagger (2002) – is a surprisingly touching story of loss and rekindled sexuality. Featuring a sensual soundtrack (courtesy of Devendra Banhart and Israeli songstress Keren Ann) and several noteworthy performances, including key turns from Ohad Knoller and Lior Ashkenazi, Yossi functions well as a sensitive and emotive portrayal of one ageing individual’s journey back from the depths of grief and despair.

Ten years on from the tragic death of his army compatriot and lover Jagger at the Lebanese border, ex-serviceman Yossi (Knoller) has a new life as a doctor in Tel Aviv. Closed off from his friends (?) and colleagues, this lonely thirtysomething snaps back to harsh reality when he meets and treats Jagger’s mother, visiting his hospital for a routine medical examination. Revealing both his identity and his relationship with the deceased to the boy’s near-speechless parents, Yossi departs for the solitude of Sinai. En route, however, he meets the vivacious Tom (Oz Zehavi), a handsome young soldier who sets our frowning friend on the long and winding road to recovery. 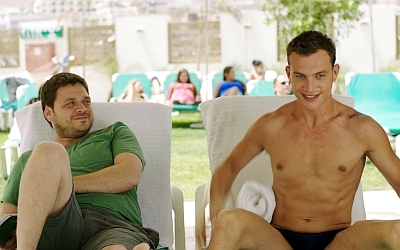 Whilst there’s little or nothing particularly new or revolutionary about the themes and subjects broached in Yossi (those looking for any real political subtext would be best served elsewhere), Fox constructs his delicate drama with a degree of elegance and poise, providing a more than satisfying arc of one man’s salvation from the brink of depression. Yossi’s own self doubt and demoralising lack of self esteem is perhaps most poignant of all – in an early scene, he’s forced to apologise for posting a thinner, more youthful photo of himself on an online dating site – and effectively captures that sense of anxiety and desperation that can afflict the lost and isolated.

Though only present for the first half of Fox’s film, Israeli cinema stalwart Ashkenazi (last seen in 2011 festival favourite Footnote) carries across most of the comic relief as Yossi’s morally dubious guardian angel – not so much perplexed by our protagonist’s sexuality than the complete lack there of. The overworked and under-loved doctor, played with stoic amiability by Knoller, seems confined to his own self-imposed abstinence, only eventually discovering true freedom outside of the clinical climes of the hospital gates and in the company of Tom and his raucous squad.

From a national cinema so preoccupied with dispute and conflict comes a heartfelt, warming tale of the healing power of companionship mutual attraction. There have undoubtedly been a plethora of better-made, better-presented world cinema efforts in what may be viewed retrospectively as a bumper year. Regardless, Fox’s Yossi is certainly one of the most crowd-pleasing.