For anyone who has seen Douglas Hickox’s sublimely macabre 1973 horror Theatre of Blood, the basic plot of James McTeigue’s The Raven (2012) should feel more than familiar. In place of the works of Shakespeare, this time our enigmatic killer has chosen to off his/her victims according to the works of acclaimed 19th century horror writer and poet Edgar Allan Poe – and what better person to track down this psychopathic individual that Poe himself (played here by John Cusack).

Effectively relaying a fictionalised account of the last four/five days of Poe’s life (prior to him being found dead on a Baltimore park bench in 1849), we are introduced to the renowned author of The Tell-Tale Heart and The Pit and the Pendulum as he skulks from inn to inn, promising imminent riches to any barkeep brave enough to placate his brandy-soaked rhetoric. However, it seems that Poe still has one remaining admirer in the guise of a cloaked killer, who sets about realising some of the author’s most gruesome tales with murderous fervour. After acquitting himself as a potential suspect, Poe joins forces with the headstrong Detective Emmett Fields (Luke Evans) to sniff out the fiend before time runs out. 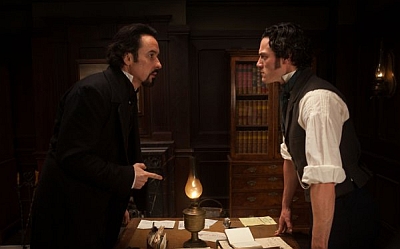 In truth, despite the somewhat hackneyed ‘killer vs. inspiration’ plot contrivance, The Raven start off well. Cusack is as wide-eyed and manic a Poe as one could have hoped for, somehow managing to reel off his colourful prose with a sense of real vigour (one can only be thankful that Nic Cage wasn’t approached for this particular role). A number of the film’s best lines also come in this initial 30 minute flourish, often revolving around the literary critics’ place in society – criticism is described as the “easy stuff” by the editor of The Patriot, to which Poe contributes.

Despite such good initial work by Cusack and director McTeigue (best know for 2005’s Alan Moore graphic novel adaptation V for Vendetta), The Raven is quick to rest on its laurels, swiftly falling into the customary game of cat-and-mouse between antagonist and protagonist – the latter predictably always that one step behind. Predictability is a crippling factor throughout, and the final reveal may leave many severely underwhelmed – this being a film depicting the final days of an author who once unveiled a murderer of women in the Parisian suburbs as (spoiler alert) an escaped Orangutan.

Whilst The Raven doesn’t sink to the levels of literary/historical desecration seen in the 2001’s abysmal From Hell, audiences new to Edgar Allan Poe’s work will comes away from McTeigue’s trite thriller with little understanding of the man himself, the times he lived him, or his hugely influential canon.