Remaking a film is always a tricky proposition, yet this was the task undertaken by Len Wiseman with Total Recall (2012), reinventing the narrative shell of Philip K. Dick’s novel We Can Remember It for You Wholesale and Paul Verhoeven’s much cherished original, yet somehow also disregarding the lewd humour of its 1990 predecessor. Colin Farrell steps into the mammoth boots of Arnold Schwarzenegger to play protagonist Douglas Quaid, a simple assembly line worker who, whilst undergoing an innovative memory implant procedure, dramatically finds himself accused of being a spy and inheriting some unknown talents in the process.

Quaid’s world suddenly becomes foreign to him and – forgoing the original Recall’s engaging trip to Mars in favour of a giant lift which connects the Earth’s two remaining inhabitable districts – quickly sets about putting the pieces together to find out his true identity. Sadly, the cryptic foundations of this science fiction yarn are barely fleshed out any more than this, with Farrell unceremoniously led through a series of hackneyed chase scenes which see him endlessly fall through roofs, crouch behind walls and jump from building to building, in an artificial universe that feels more like a playground than a dystopian cityscape. 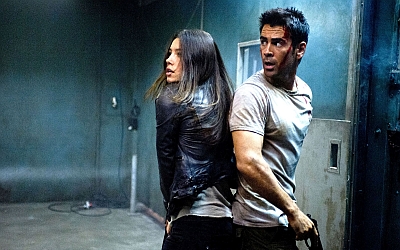 Wiseman’s Total Recall all too often relies upon familiar sci-fi tropes, perhaps for fear of the audience becoming too disorientated by Wiseman’s alternative Recall landscape. There are robotic police that remind us of 2004’s I, Robot, hover cars that riff on 2002’s Minority Report and even an orient-infused, bustling futuristic metropolis a la Blade Runner (1982). What’s more, the abundance of needless, J. J. Abrams-style lens glare will blind you to anything new or exciting. Even the film’s trite dialogue shows signs of uneasiness, with such lines as “It’s still the best way to get chemicals into the body” delivered during an intravenous injection clearly redundant in a world that shouldn’t appear futuristic to its inhabitants.

Wiseman’s Total Recall isn’t necessary a bad film per se, but is just so incongruously forgettable that it fails to successfully absorb the audience, sadly lulling them into a nonchalant trance where nothing really matters and actions are inconsequential. Whilst commendable for not simply rehashing the same plot and jokes of Verhoeven’s original, Wiseman’s film doesn’t entirely remove itself from its humble foundations, with the film’s iconic three breasted woman making a cameo. Whilst this is clearly intended as a homage to the film’s origins, purely acts to remind us of the Wiseman’s film is fighting a losing battle.

This heightened nostalgia for the original Total Recall may seem jarring, as Verhoeven’s film was always a muddled and flawed blockbuster veiled under an endearing light-hearted touch and a sly wink at the audience. What it did well was to successfully transfer old fashioned, science fiction sensibilities into a playful example of popcorn cinema. However, by removing this jovial approach, Wiseman’s 2012 update simply feels like the very same muddled mess of a film, just without any of the charisma.