Capping off a standout year for appealing, thought-provoking documentaries, Jeff Orlowski’s Sundance Film Festival hit Chasing Ice (2012) is arguably the pick of the bunch – visually at least. Following the pioneering exploits of photographer turned climate change activist James Balog (now on his fourth knee operation due to his penchant for hiking in sub-zero temperature), Orlowski thankfully doesn’t feel the need to ram the issue of global warming down his viewers’ throats. Instead, the director seems to share the same belief as his likeable main subject; that certain stories are best told through images.

A compelling, well-illustrated investigation into the effects of climate change on the gigantic glaciers that reside in some of the word’s most inhospitable reaches (including Greenland and Iceland), Balog calmly and methodically walks his audience through his life’s work – the groundbreaking Extreme Ice Survey. With two eager sidekicks by his side and a supporting cast consisting of numerous hardy cameras, fixed in position to record glacial movement in any weather, Balog is able to show us spectacles so gradual – or rare – as to be almost entirely unique. 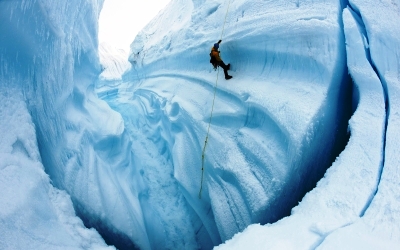 Similarly rare is the fact that Chasing Ice, as a documentary, demands a grand stage to work at its optimum. Orlowski’s soulful direction, coupled with Balog’s evocative eye, predictably leads to a number of awe-inspiring juxtapositions, best sampled on the big screen. The sheer scale of the Earth’s thawing wastes can only be properly appreciated when augmented by the microscopic figures of Balog and his team, mere ants crawling across a shimmering expanse of white and blue. The film’s standout scene is undoubtedly the apocalyptic ‘calving’ of an entire ice formation, recalling that infamous ‘folding city’ scene from Christopher Nolan’s Inception (2010) once we realise some of the protrusions are as large as skyscrapers.

Unlike his politician counterpart in 2006’s An Inconvenient Truth, Balog never feels the need to outright lecture his audience on the perils of global warming or the desalination of the world’s oceans. A Scott-like adventurer in very much the same intrepid/eccentric mould, Balog’s enthusiasm and (justifiable) righteousness is tremendously infectious, but thankfully his insights go far beyond exclamations of childlike wonder. A real sense of both desperation and frustration emanates from our dedicated star throughout, as if he would simply cease to function without his work (despite the loving support of his amiable family).

With Chasing Ice, Balog and Orlowski have made not only one of this year’s finest documentaries, but also one of the most gently persuasive, user-friendly discourses on climate change to date. Whilst the elusive Best Documentary Feature Academy Award (for which it’s made the shortlist) may escape a film so passionately focused on one defined viewpoint on a hugely divisive sociopolitical issue, even sceptics may find their horizons ever so slightly expanded by this powerfully visual, ‘tip of the iceberg’ think piece.