An ever so cynical, pre-award season release riffing on potential Academy Award nominee Zero Dark Thirty (2012), John Stockwell’s Codename: Operation Geronimo (aka SEAL Team Six: The Raid on Osama Bin Laden, 2012) – from the producer of 2010’s The Hurt Locker, Kathryn Bigelow’s Oscar winner – suffers from both an underwhelming, TV-friendly cast and some similarly below average direction. Ostensibly retelling the real-life events that led up to (and included) the assassination of former public enemy #1 Osama Bin Laden, the film attempts to capture the nail-biting tension of those fateful events last May, but with precious little style or panache.

Unlike Bigelow’s latest, Operation Geronimo places the majority of its focus on the elite Navy SEAL team (SEAL Team 6, to be precise) tasked with putting an end to the infamous al-Qaeda head. After receiving compelling intel pointing the hunt towards a secure, guarded compound in Pakistan, US intelligence agents work around the clock to confirm the outlandish claims, whilst also prepping the SEAL squad for the ultra delicate task at hand. However, a number of splinters within this group of highly trained killers threaten to dismantle the mission before the men have even boarded their Black Hawks. 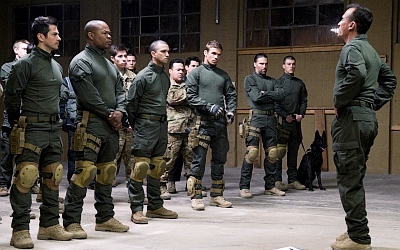 Recognisable faces on parade for the Emmy Award-winning Stockwell include Planet Terror’s Freddy Rodriguez, Prison Break’s William Fichtner and charmless US rap star Alvin ‘Xzibit’ Joiner, none of whom do anything remotely innovative or new in their respective roles. Fichtner, once again typecast as a stern authority figure, is arguably the best of a mediocre lot, but fails to ignite the film’s plethora of arduous and poorly written scenes within US intelligence HQ. Similarly irksome is the grating contrivance that almost no member of this apparent ‘crack team’ of SEALs is able to keep their emotions in check for seemingly any longer than five minutes. Predictably, macho face-offs are in plentiful supply.

Action sequences and the final climactic gunfight are handled slightly better, with some perfectly functional effects and pyrotechnics helping to instil at least some sense of danger and peril into the lives of SEAL Team 6’s badly drawn grunts. More effective still is a subplot involving two undercover agents in Pakistan, gathering the precious information that would ultimately lead to Bin Laden’s untimely, yet hugely significant demise. However, these highlights are too infrequent and lightweight to ever galvanise Operation Geronimo as an accomplished thriller. Bigelow’s Zero Dark Thirty is just on the horizon – accept no substitutes.