“It’s not our job to change them,” remarks Czech engineer Milan Smrž when discussing the inhabitants of a small Zambian township in Martin Maraček’s Solar Eclipse (Pod sluncem tma, 2011). This year’s DocHouse Thursdays strand will kick off with a screening of the film at London’s Rich Mix Cinema on 10 January, which will also feature a Skype Q&A with Milan’s fellow engineer (and Maraček subject) Tomàš Tozicka. DocHouse’s latest factual offering is an intriguing, often heartwarming look at the two men as they return to Zambia, in order to check on the progress of a village that they provided with electricity five years previous.

What Milan and Tomàš find is that the solar electric system that they had installed thanks to aid funding from the Czech government is not quite operating at its peak performance. In fact, when they arrive at the designated guest house, their first job is to stumble around, head torches sweeping through the darkness to repair the non-existent lighting. This scene is almost a perfect encapsulation of the film; a blend of the sometimes cantankerous and oft exasperated duo attempting to mend the system which has fallen into total disrepair. 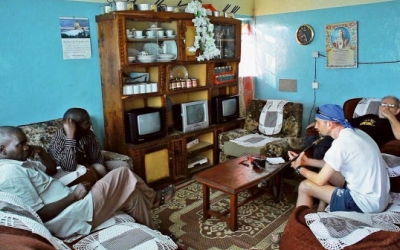 More observation than expose, Milan and Tomàš returning to the village highlights some of the issues that can prove a thorn in the side when it comes to delivering international aid. They had originally left the system in good working order throughout the village; now, many houses are without electricity at all. The various bumps in the road range from the comical, to the baffling to, to the downright farcical. At one point they find a wire, for regulating the water pump, which someone has attempted to chew through.

One house has three television sets lined-up next to one another in the living room, whilst a local VIP has enough batteries to support a whole family. The most irritating aspect for the two aid workers, though, is that the local residents seem determined not to help themselves and it is this to which Milan is referring in the earlier quote. Locals are intent on repairing and adjusting the transistors and wiring themselves despite any kind of expertise. This is compounded by the fact that a trained Zambian electrician would be available to help if only he were consulted.

Whilst it does raise many apposite points, the films position as an onlooker does mean that it never really tackles, or attempts to, the underlying reasons for these problems. Deeper delving into the concerns would undoubtedly have made for a more urgent and compelling documentary. Despite this, Solar Eclipse should be commended for trying to bring to light such a relevant and contentious issue.