The son of Canada’s foremost exponent of intellectually challenging body horror cinema, the genetically blessed Brandon Cronenberg made his Cannes Film Festival bow last year with Antiviral (2012), which now seeps its way into UK cinemas as part of a limited theatrical run. With a viscous smattering of paternal influence worn brazenly on his bloodied sleeve, Cronenberg Jr. has succeeded in constructing an almost sickeningly dark, near-future satire on the dangerously infectious cult of celebrity, whilst at the same time perhaps struggling to quite find that unique voice which every killer debut requires.

Up-and-coming talent Caleb Landry Jones plays protagonist Syd March, a disenfranchised employee at a major pharmaceutical corporation that specialises in infecting paying customers with diseases and viruses belonging to famous celebrities – in order for the client to ‘feel’ closer to their respective idol(s). The firm’s most bankable star is Buddhist beauty Hannah Geist (Sarah Gadon, last seen in Cronenberg Sr.’s 2012 Don DeLillo adaptation Cosmopolis), with whom Syd shares an ever-growing infatuation. Syphoning of some of Geist’s blood for his own use, Syd becomes embroiled in a viral assassination attempt on the pin-up’s life, and faces a race against time to save both her life and his own. 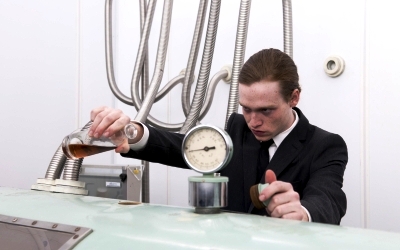 Taking a leaf – if not several branches – out of his father’s book of bodily discombobulation, Cronenberg fleshes out this horrifying dystopia with elegance and poise, his camera following the deteriorating Syd into every sordid nook and cranny in search of the cure to his blight. Whilst its sociopolitical message may be hammered home harder than necessary at points, it’s still pleasing to see a young director eschewing hover-cars and androids when depicting the next era of human civilisation. Furthermore, in Landry Jones, Cronenberg has found the ideal ‘unconventional’ lead star for such a twisted future vision, as reprehensible and reptilian as the world around him, but with that faint glimmer of requisite humanity.

Where Antiviral does flounder, however, is in its obvious similarity to numerous David Cronenberg classics of the past. Imitation, so we’re told, is the sincerest form of flattery, but when the groundbreaking auteur that you’re paying homage to is your own father, it’s not unthinkable that genre-lover’s noses could be put out of joint. Whilst Cronenberg Sr. busies himself with literary adaptations and Russian gang-members, his prodigy can certainly be forgiven for wanting to climb up the industrial ladder on the coat tales of his prestigious pater. As an appetiser, Antiviral still feels like a noteworthy debut piece, courtesy of a director with evident talent. What Brandon needs to avoid, however, is the same type of hero worship that his first feature finds so repulsive.