Stuart Urban’s May I Kill U? (2012) is a low budget British feature so inherently dreadful that it very nearly defies description. There is really nothing to say in favour of this woefully inept, classless ‘horror’ bore – though arguably calling it as such only serves to sully the good name of the genre. The only thing remotely scary about this drivel, both written and directed by Urban and starring Kevin Bishop, Jack Doolan and veteran actress Frances Barber, is how it managed to get the backing to be made in the first place. Within, we follow the depressing antics of über-irritating protagonist Baz (Bishop), one of London’s new style ‘bicycle cops’, fighting crime on the mean streets of the capital.

Following a traffic accident, Baz begins to have blinding headaches, which have the consequent effect of urging him to take law into his own hands, killing those he sees as breaking it. Filming the murders on his helmet-mounted web cam, our homicidal cyclist uploads the footage anonymously on Twitter, soon becoming an internet sensation. However, Baz’s increasingly erratic behaviour at work raises suspicions, leading to a startling and (apparently) unexpected climax. 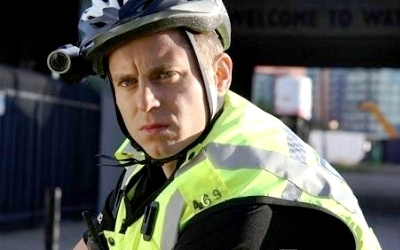 May I Kill U? has all the finesse of a clumsy, clunking student production. In fact, if it was made by a collection of twentysomethings from film school, there may be some excuse for the complete absence of quality – you could put it down to inexperience, perhaps. Sadly, this is a film which is meant to be have been produced by professionals, but as such should be an embarrassment to all involved. Some of the cast (including Victor Konstantine, who gives a reasonable portrayal of an Eastern European people trafficker, even if he does have little more to do than grunt and look moody) appear to be new to the acting profession, and can therefore be given some leeway. Others (Bishop included) aren’t quite as lucky.

One can only imagine that the involvement of Francis Barber, an established actress of some standing, as Baz’s neurotic mother, was due to lack of prospects rather than personal choice. The previously mentioned horror element is negligible, mainly involving people being gratuitously bludgeoned to pulp, strangled or electrocuted. Equally bad is the way that Urban’s film depicts ethnic and social minorities, portraying them – almost with fail – as criminal lowlifes, rather than mere victims of Baz’s psychotic rage.

Films like Urban’s May I Kill U? are prime examples of just what’s currently wrong with the British film industry. Not only is it disturbing when you realise that backers have seen fit to throw good money after bad (or in this case atrocious) filmmaking, but also that the same money could have been spent bringing more worthy, deserving work to the screen – utterly depressing, and one to avoid.