The world-renowned Don McCullin spent over three decades of his illustrious career on the frontline of human conflict. From 1969 to 1984, he was the celebrated photographer for The Sunday Times, where he covered an assortment of wars, a number of famines around the world, and even the plight of the homeless in sixties London. Unsurprisingly, all of the above makes for an enthralling documentary – as it does with 2013’s McCullin – but filmmakers David Morris and Jacqui Morris have gone one better than a simple biopic of this great figure by actually calling on the man himself to offer a haunting retrospective of his work.

The film thankfully isn’t a fawning portrait of McCullin, either. With the exception of his former Times editor Harold Evans, this is a one-man show with the photojournalist directly addressing the camera in a series of intimate, probing close-ups (which really illuminate his wizened, lived-in looks). 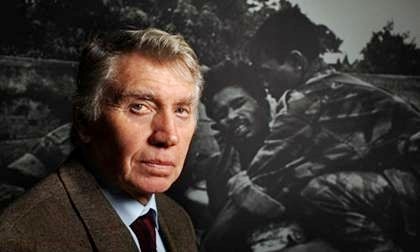 This pseudo-confessional style is where the film derives much of its power as he solemnly (and candidly) recounts the many assignments he undertook, and the moral quandaries he often found himself in whilst chasing those stunning compositions. It’s these first-hand accounts and the existential crisis he wrestled with (on a seemingly daily basis) which are particularly captivating to hear about. Throughout his narration, it’s apparent that McCullin is as skilled at painted as vivid a picture as his images often do, and that pain and suffering he witnessed has left an indelible mark on his psyche.

His tenure at The Sunday Times ended soon after Rupert Murdoch bought the publication in early 80s and insisted that the magazine turn its gaze towards celebrity in an attempt to make it ostensibly more appealing. It was a move which the photographer was venomously against, and McCullin offers a welcoming peak into the world of an artist who captured some truly devastating (yet beautiful) imagery, the likes of which offer a sobering respite to this glossy, media-saturated era.

You may have casually leafed through one of the photographer’s books in the past, or even visited a gallery of this work, but this documentary is a must-see for anyone who has ever expressed an interest in this fascinating figure (and for those keen to witness what life is like on the other side of the lens). With recent reports that McCullin is dusting off his camera and planning a trip – at the ripe old age of 77 – to Syria, this news will come as no surprise to those who see the film. His profession is the kind which you seldom retire from.