Quartet (2012), the first turn at directing by Hollywood icon Dustin Hoffman, is a film which requires little effort – either from those taking part or from the viewer. That’s not intended to be derogatory, indeed quite the opposite, as everything about this ode to accepting the inevitable onset of old age, starring Maggie Smith, Billy Connolly, Tom Courtenay and Pauline Collins, is a pure unadulterated pleasure – you just sit back, relax and let it wash over you. Hoffman’s film follows three fading opera stars, Wilf (Connolly), Reginald (Courtenay) and Cissy (Collins), who are living out their days in the rural splendour of a leafy English country retirement home.

Each year they take part in a concert to celebrate the birthday of the composer Verdi and to raise funds for the upkeep of the home. This year however things are different with the arrival of new resident Jean (Smith), an opera diva of the grandest kind whose presence resurrects painful memories for the three friends and is not exactly conducive to harmony amongst the extended company. 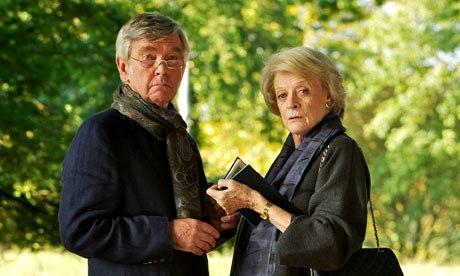 Hoffman is almost the perfect director for this type of film as, unlike so many actors who try their hand on the other side of the camera, he is not tempted into a cameo appearance in Quartet. Instead, he remains out of shot, though his presence is undoubtedly felt on the screen. Everything visible, from the ensemble cast to the idyllic settings, melds seamlessly under the clear guidance of a man who has been a part of the fabric of modern cinema for so long that the role of director must have come as second nature to him.

The wider cast are pitch perfect as the group of ageing operatic and musical stars, unwilling to accept that, for the most part, their moment centre-stage is but a faded memory. Indeed, having watched the film, the only aspect which you may find slightly off-key is having Connolly and Smith vie for prime spot. When they come on screen these two old troupers steal the limelight banishing everyone else to the wings, which is no mean feat when you consider the calibre of the those they’re working with.

This really the only minor quibble in an otherwise whimsical blend of dry wit and acid sharp timing which makes for a delightful cocktail of friendship and the acceptance of the frailties, both in yourself and in others. Quartet provides a marvellously feel-good way with which to see in the new year. The only real question the film raises is why it took Hoffman so long to make his directorial debut. Going by the evidence here we can only hope he does it again soon.