With The Last Stand (2013), the Austrian Oak Arnold Schwarzenegger – like he always said he would be – is back on leading man duty once again. The former Mr. Universe turned Mr. California returns as a different kind of public servant, an ex-LAPD narcotics cop lying low as the sheriff of Sommerton Junction, a sleepy Arizona border town. When a heavily connected cartel lord, Gabriel Cortez (Eduardo Noriega), is busted out of federal custody in the most improbable car-jacking since Fast Five (2012) and heads for Mexico, Gary Cooper-like lawman Arnold, and his ramshackle posse of crooked-shooting deputies, set out to stop him.

Directed by madcap South Korean filmmaker Kim Jee-woon (The Good, The Bad, and the Weird; I Saw the Devil), the first hour of The Last Stand is surprisingly short on both action and Arnie. Despite looking more like the Terminator than ever, with his stiff neck, sheening eyes, and mechanical facial expressions, Arnold spends his semi-retirement with his reading glasses on, discussing getting old with the town folk at the local diner. An age-old vision of small-town community, the Sommertonites include Johnny Knoxville as a scraggly, bellicose gun-nut with enough ordnance to fight the Civil War, Jaimie Alexander and Zach Gilford as earnest and tenderfoot deputies, Luis Guzmán as the rather-be-at-home ‘Figgy’, Rodrigo Santoro as a remorseful jailbird, and Harry Dean Stanton as one ornery sonofabitch. 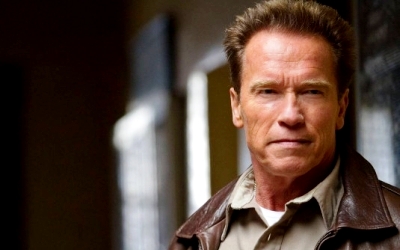 What follows is an ill-timed, feature-length advertisement for assault weapons and the Second Amendment. Cars are used for cover and not for driving; Swedish actor Peter Stormare, as one of Cortez’s numerous bearded henchman, brings out the ‘big gun’, and everything else he can find; blood explodes into clouds of red smoke; Knoxville tries to blow himself up; and Schwarzenegger delivers one-liners with the dad-like zest. When Schwarzenegger blows the back door off a school bus and brandishes a minigun, with Knoxville feeding ammo with the deranged enthusiasm of a battle-brave Alex Jones, he announces with a wink and a thud, “Welcome to Summerton”.

Although Kim has carved a career out of hyper-violent silliness, his first American film is a throwback to the low CGI, stunt action-comedies of the 1980s and the venerable themes of justice, honour and loyalty prevalent in classic Hollywood westerns such as High Noon (1952). The Last Stand is more Conan the Barbarian (1982), Last Action Hero (1993) and True Lies (1994) than it is the Terminator or Predator cycle. It also serves as moderately diverting and totally undemanding old-school Arnie fun, with enough wise cracks and rampant destruction to satisfy audiences until Terminator 5, The Legend of Conan and/or Triplets, an upcoming sequel to 1988’s Twins.