Historically, anthology films are a patchy affair, so almost predictably the five chapters which make up horror mashup V/H/S (2012) (thematically linked by the concept of found footage material played back on VHS tape) were always unlikely to buck the trend. Last year’s Handycam superhero flick Chronicle (2012), directed by newcomer Josh Trank, managed to breathe new life into this rather turgid device through an abundance of imagination and some thoughtfully-staged set pieces. The overriding issue here is, although the filmmakers have a shorter time span to tell their tales, there’s a distinct lack of imagination and genuine sense of fun on display.

The only one to use the antiquated VHS format is the first segment, which sees an unruly and socially-aggressive bunch of youngsters break into a house, and it hints at the playful fun you can have with this medium. The rest use a variety of contemporary digital recording devices to mine their thrills and shocks, some of which will be instantly identifiable to audiences well-versed in the Paranormal Activity series and its imitators. 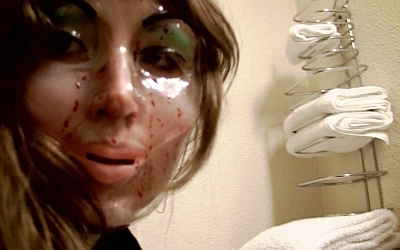 Genre bright young thing Ti West and mumblecore graduate Joe Swanberg are the two biggest names in the directors list, but their usual distinctive voices are lost here. West’s segment, which begins as an innocuous video travelogue of sorts, until the young couple in question begin experiencing an unwanted motel guest, largely lacks that creeping sense of unease and slow-build suspense found in his full-length features. Frustratingly, he provides little else to chew on between the more ominous moments, and his abrupt, cheaply-staged ending fails to offer a fitfully twisted resolution.

That obligatory, yet superfluous, sight of naked females and foul-mouthed, sexist jocks – predictably destined as victim fodder – also fails to really engage. The makers would argue that they’re only referencing the tropes of this genre, which is true to an extent, but it feels like something fresh (and genuinely subversive) needs to be brought to the table if that’s the case. The final tale is the most successful, and it’s surprisingly delicate use of CGI offers an entertaining look at crafting something a little outside of the norm. With a follow-up on the way entitled S-V/H/S (2013), let’s hope the next set of directors (which includes 2011 grindhouse effort Hobo with a Shotgun’s Jason Eisener amongst the contributors) can learn from some of the shortcomings here.

V/H/S will undoubtedly entertain those in the mood for an easy horror fix, but there’s not enough to justify its lengthy 100-plus minutes. In the end, it fails to deliver the kind of audience-pleasing schlock many films from the era of its namesake managed to successfully deliver with similarly low-budgetary resources and limitations.