Premièring in the Panorama section of this year’s 63rd Berlin Film Festival, A Fold in My Blanket (Chemi sabnis naketsi, 2013) is the debut feature from Georgian filmmaker and former Berlin resident Zaza Rusadze. Ignoring the usual gritty and harsh approach to social commentary, Rusadze’s examination of the social constraints of a small Georgian community is an incredibly atmospheric and patently dark black comedy with a surrealist twist. Set in a quiet town in which “everyone has Russian names now”, local protagonist Dimitrij (Tornike Bziava) feels sorely out of place from the very outset.

Having recently returned from travelling around Western Europe, Dimitrij stands out even more, with his ‘relaxed attitude’ ostracising him from a populace that finds pleasure in displaying flags, collecting guns and spending tedious afternoons listening to opera and eating stale cake. However, Dimitrij manages to find escape from this insular sect through his one passion – rock climbing. One day, a strange young man (Andrej, played by Tornike Gogrichiani) interrupts Dimitrij’s cheerless life and he soon finds he has a companion to integrate into his rural excursions. However, when this clandestine young man is subsequently arrested for murder, Dimitrij must try to save him or forever be reliant on his vivid imagination to escape this emotionally numb world of tradition and monotony. 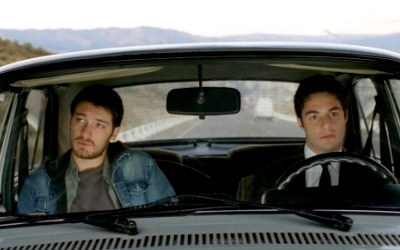 To truly decipher the rich tapestry of ideas that lie beneath the polished veneer of Rusadze’s A Fold in My Blanket is to book yourself a one way ticket to the realm of insanity. Surreal to point of near complete bafflement, this complex work of cinema will undeniably alienate the majority of its viewers. Yet, whilst it plays out primarily as a complex metaphor for the various desires to escape the depressing elements which infect our lives, there’s little denying that Rusadze’s latest is a work of undisputed beauty. Shot like a collection of live action realist oil paintings, every frame is meticulously lit and held just long enough for your eye to appreciate its stark beauty and warmth – a real treat, for the eyes at least.

Not dissimilar to the vibrant urgency of Finnish director Aki Kaurismäki, A Fold in My Blanket is comprised of unnaturally sharp lines and contrasting pastel shades which create a dreamlike backdrop for this vividly atmospheric and brave directorial debut. Combine these beguiling visuals with a penchant for the surreal dreamlike narrative approach of post-Lost Highway Lynchian cinema, and you have a courageous and fearless film that might test your patience, yet undeniably still demands your undivided attention.

So darkly comic that it’s almost entirely opaque, A Fold in My Blanket is a near-impervious diversion into the vivid imagination of a surrealist filmmaking mind. However, for those that like to painstakingly decrypt their cinema, there’s certainly plenty of opulent philosophies to be harvested from this Georgian oddity.