Winner of the Golden Bear prize at last year’s Berlinale, the Taviani brothers’ Caesar Must Die (Cesare deve morire, 2012) is a humanist quasi-documentary about a group of Italian maximum security prisoners performing William Shakespeare’s illustrious tragedy, Julius Caesar. A fascinatingly perceptive film that blurs the lines between art and reality, Caesar Must Die brings a whole new intensity to this Elizabethan examination of betrayal and duplicity. The Taviani brothers “let slip the dogs of war”, thrusting the audience into their seats for the final scenes of the play, before observing the actors being rounded up and led back to their cells.

The elliptical approach employed by the Tavianis’ latest offering alerts us to the repetitive nature of prison life – whilst these men may find freedom through prose and theatre, come tomorrow they’re back to the harsh reality of their lengthy incarceration. The vibrant intro certainly provides a lively welcome to Rebibbia prison, the stage of this peculiar documentary. However, once inside, the Tavianis present us with a world devoid of colour and vivacity, filming the rehearsals of these thespian inmates (many of which are serving life sentences for Mafia-related crimes) through a gritty black and white palette that reflects the hopelessness of their existence. 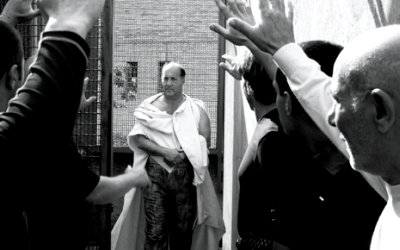 Caesar Must Die rejects traditional doc techniques in favour of observing how these men replicate the complex and morally conflicted mindset of their characters. The prisoner’s pasts are never thoroughly examined, with their current unenviable predicament enough for the audience to realise that theirs are lives familiar with the violence and conspiracy which consumes Shakespeare’s original text. Allowing the prisoners to examine their own misdemeanours, the play is very much a doubled-edged sword, reflecting their troubled past, whilst simultaneously allowing them to escape their own absence of liberty. This all culminates in a powerfully effective presentation of art imitating life – and, indeed, vice versa.

Undoubtedly, there will be those who’ll struggle with this unique approach, and it would be fair to say that the heavily-staged re-enactment of rehearsals feel far too scripted. At times, it’s all too easy to question the artistic objectiveness of Paolo and Vittorio Taviani’s attempts to present us with a humanist exploration of the dichotomy between reality and fabrication – with the film weighing far more generously towards fiction. However, whilst lacking in genuine spontaneity, Caesar Must Die allows its audience to escape the claustrophobic confines of the prison walls, forgetting briefly that these events are being recreated in a world where even the simplest joys of existence are withheld.

“A dish fit for the gods”, Caesar Must Die turns the oppressive and artistically stifling structure of a daily incarceration into a hive of creativity. Paolo and Vittorio Taviani have fashioned a seductive and truly fascinating example of the escapist qualities of art, whether it be from the mundane rigours of modern life or – in this case – the towering walls of an Italian prison.