Film Review: ‘I Give It a Year’

Dan Mazer is perhaps best known for being the co-writer and producer of Sacha Baron Cohen’s Borat (2006) and Bruno (2009). With I Give It a Year (2013), Mazer has assembled a stellar cast including Rose Byrne, Anna Faris, Simon Baker and Rafe Spall to star in his directorial debut – a quintessentially British comedy endeavouring to become the antithesis of a well-worn genre. Opening where most rom-coms conclude, Mazer’s debut begins with the shambolic wedding of Nat (Byrne) and Josh (Spall). Despite their noticeable differences, novelist Josh and high-flying advertising executive Nat have enjoyed a passionate engagement and chose to get married swiftly.

Blinded by love, they quickly find themselves bound by law and faced with the everyday realities of married life. Their matrimonial anxieties are amplified when Josh’s ex girlfriend, Chloe (Faris), declares her feelings for Josh might not be as defunct as first thought. Nat, meanwhile, is introduced to sophisticated entrepreneur Guy (Baker) whose refined charm become hard for her to ignore. With the lure of adultery on the margins of both Nat and Josh’s lives, the pair decide to give it a year and fight for their marriage. Yet with neither side wanting to be the first to throw in the towel, what fate lies in wait for this doomed relationship? 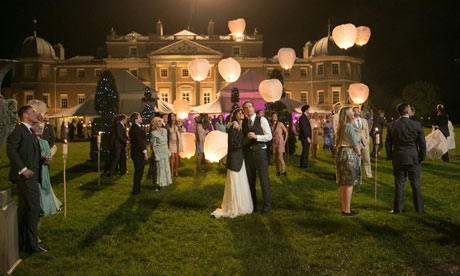 Attempting to invert the classic rom-com template, director Mazer has created a film that’s both against its genre, whilst also curiously reverential towards it. The catalyst for I Give It a Year’s incompatible protagonists to split is eventually the romantic interest of external parties, rather than their own organically evolving distaste for each other. The film’s final act merely transforms into two separate romantic narratives, that sadly resort to the genre’s formulaic traits far too quickly. Ultimately, these predictable events turn this ambitious attempt to breathe new life into an ailing genre into a familiar and rather disappointing comedy of errors, conforming to the same trite narrative templates it’s attempting to deride.

There’s no denying that Mazer has a strong understanding of comedy, and I Give It a Year is suitably littered with a plethora of jokes and jovial set pieces. However, this reliance on comedy ultimately distorts the relationships on screen to little more than a gaggle of empty vessels which Mazer uses as mere sketch show characters. With the jokes firing off the screen with the unrelenting regularity of a sentry gun tower, the film creates a false sense of enjoyment. As the saying goes, if you throw enough excrement some of it has to stick, and thanks to this age old principle it’s impossible not to find yourself laughing at various points throughout the film. Sadly, this laughter only evokes a sense of guilt that you’re finding this incredibly bland and puerile comedy funny at all.

An audience is certainly out there for this characteristically British comedy, and the film’s Valentines-proxy release date will ensure it profits at the box office. However, whilst audience members will no doubt be satisfied by several laugh-out-loud moments of smutty and off-hand humour, the fact remains that I Give It a Year fails miserably in its attempts to revolutionise the rom-com genre.