Film Review: ‘To the Wonder’

Arriving swiftly after the release of The Tree of Life (2011), Terence Malick’s latest waltz of love and sorrow To the Wonder (2012) marks a prolific creative period in this notoriously introverted director’s career. However, whilst the divisive nature of The Tree of Life’s existential approach won as many plaudits as it did decriers, Malick’s latest metaphysical voyage may test the patience of even his most ardent fans. We follow the tempestuous transatlantic love story of Neil (Ben Affleck) and Marina (Olga Kurylenko), whose once passionate romance fails to acclimatize to the rigours of modern life when the pair relocate from Paris to Oklahoma.

The pair’s lives are further complicated by the resurrection of Neil’s feelings for his childhood sweetheart Jane (Rachel McAdams), whilst their disintegrating romance is mirrored by the existential spiritual crisis of faith by the community’s local priest and Marina’s confidant Father Quintana (Javier Bardem). Malick’s metaphorical cinematic dialect, gushing orchestral score and expressionist, spiralling camera work remains in To the Wonder, yet because of the film’s more intimate and decidedly personal tale these ethereal flourishes disengage the audience from this beautifully rendered ballet of misery and melancholy. 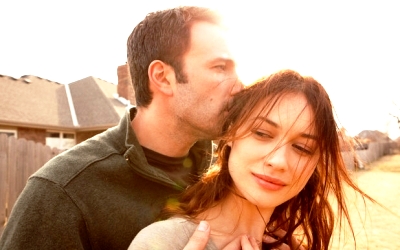 In The Tree of Life (2011), Malick’s distinctive use of ethereal, whispering commentary grounded the films epic visuals within the confines of a personal tale of grief. However, in To the Wonder this approach is reversed, with the film’s sweeping aesthetics used to push the film’s story forward, whilst ostentatious soliloquies attempt to magnify each character’s internal anguish as something more than the egocentric angst of a broken hearted romantic. Had these indulgent voiceovers conveyed the protagonist’s present state of mind, then perhaps To the Wonder wouldn’t be such a difficult film to engage with on an emotional level – played out by a cast of ciphers, who float in and out of the camera’s wandering gaze.

A sinuous tapestry of breathtaking imagery, To the Wonder is undeniably a beautiful example of a visionary filmmaker creating yet another visual rhapsody of fading sunsets and the movements of nature captured sewing through the fabric of time – not only capturing the beauty of creation, it positively magnifies it to epic proportions. However, due to the film’s impenetrable narrative these distinctive vignettes of nature’s glorious pirouette through life feels like Malick is merely repeating himself.

The Tree of Life seemed to divide Malick’s previous fan base in half, and due to his evolved sense of metaphysical filmmaking To the Wonder looks set to do much the same. However, even a poor Malick film remains a far more enticing and rewarding experience than the majority of inept theatrical releases we’ll be subjected to this year – it’s just a shame it’s such a relative disappointment.