A key voice within British television drama for the past three decades, Stephen Poliakoff makes gloriously flamboyant films with sprawling plots and all-star casts; Dancing on the Edge (2013), a five-part period drama set in the 1930s recently aired on terrestrial TV, is no exception. London is between two world wars and still feeling the aftermath of the Great Depression. A new musical phenomenon, led by black musicians, is about to shake things up. The Louis Lester Band plays jazz in subterranean bars in London’s seedier quarters until they are discovered by music journalist Stanley (Stoker star Matthew Goode).

Stanley introduces Louis (Chiwetel Ejiofor), the band’s charismatic front man, to his well-connected friends and persuades the swanky Imperial Hotel to let them play a regular gig. The band engages two female singers and, after the endorsement of the Prince of Wales and his brother George, their careers take off. Poliakoff’s trademarks are all here: Dancing on the Edge is lavishly shot and deliciously melodramatic, has a preoccupation with class and royalty, a sensational soundtrack and a stellar cast that includes both American and British actors. 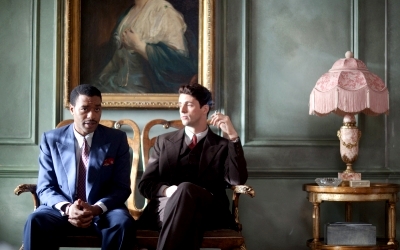 Poliakoff presents a vivid portrait of the early jazz era in Britain, yet with a distinctly political edge. Racism is, unfortunately, rife. At first, the musicians can only use the tradesman’s entrance and are not allowed into the hotel’s bar or restaurant areas unless they are playing. After cutting their first record, the band’s popularity grows. They are given rooms on the top floor and become on first name terms with the hotel’s grumpy proprietor (Mel Smith). However, fame and fortune don’t stop them from being sneered at by their fellow passengers when travelling first class by train. Members of the German Embassy are the most ferocious racists, preferring to leave the room rather than have to listen to the band play.

After the tragic murder of the band’s main singer, Jessie (Angel Coulby), Louis finds himself implicated and his attempts to flee London act as a framing device for the series. Despite celebrity status and the support of royals, class and race prejudices come to the fore even amongst those he once considered his friends. Suddenly Louis doesn’t know who to trust anymore. The behaviour of some of his biggest fans, the reclusive Lady Cremone (Jacqueline Bisset), Donaldson (Anthony Head) the suave man of leisure, and Masterson (John Goodman) the American Tycoon, becomes increasingly suspect.

There are, as always with Poliakoff, elements that will incite criticism – the meandering narrative, some stereotypical characters and occasionally clunky dialogue – but Dancing on the Edge evokes the decadent milieu so effectively, it’s easy to forgive these small flaws. There are also plenty of contemporary resonances – a financial crisis (which barely registers with the already affluent), sadistic immigration officials, a preoccupation with celebrity culture, a power-hungry newspaper magnate and, most importantly, a passion for music.

Win a copy of Stephen Poliakoff’s Dancing on the Edge on DVD with our latest competition. Follow this link to enter.