March saw the 11th Kinoteka Polish Film Festival take place across the UK – highlight being was a trio of rereleased masterpieces. Those films have now been pulled together for Second Run’s Polish Cinema Classics Volume II. The collection consists of Andrzej Wajda’s The Promised Land (Ziemia obiecana, 1975), Wojciech Marczewski’s Escape from the ‘Liberty’ Cinema (Ucieczka z kina ‘Wolnosc’, 1990) and Krzysztof Zanussi’s Illumination (Iluminacja, 1973). All affecting in their own way, these three films are essentially linked by their inventiveness and vibrancy, which shines through in different aspects of each entry.

The Promised Land was the film that garnered Wajda’s first Academy Award nomination and follows a trio of young industrialists attempting to make their fortune in the city of Lodz. With diverse ethnic and class backgrounds, the threesome’s journey examines race and status in the period upon which modern Poland was built as well as the corruptive power of wealth. It gives a rather bleak view of this particular time and place and presents a scathing portrayal of the contrast between the rich and poor of the period. The performances are all good, especially that of Daniel Olbrychski in the lead role of Karol, and the intrigue of the plot is sustained all the way to its chilling conclusion. 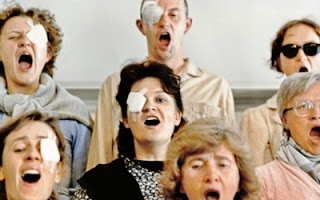 Wojciech Marcezewski’s Escape From the ‘Liberty’ Cinema is a surreal comedy about artistic censorship in his country under the Communist government. The film tells of an embittered district censor (Janusz Gajos) who comes across the rather unusual problem of a film whose actors have gone on strike in his local cinema. Crowds are drawn to the on-screen actors refusing to speak shoddy lines and saying whatever comes to mind – a disaster for censorship, with the only option being to burn the incendiary film. A wonderfully complex discourse, Escape From the ‘Liberty’ Cinema is brimming with irony and pitch black satire, and becomes a moving condemnation of censorship.

The most esoteric of the three features is Krzysztof Zanussi’s Illumination which, on the surface, tells the tale of Franciszek Retman (Stanislaw Latallo) a physics student in Warsaw. This kaleidoscopic film eschews convention, however, and seeks to explore the relationship of art and science through cinéma vérité-style drama, photographs, interviews, lectures and diagrams. Not a film for those in search of straight-forward linear narrative, the film will happily jump away from its protagonist at any moment to discuss morality or to a Wes Anderson-esque frame of a vaguely relevant object or chart. Still, the overall piece is a real triumph and as important today as it was when it was made.

A truly inspiring set of films, this will make an excellent addition to the shelf of any true cinema fan. These are three definite classics from Polish masters and each will leave you speechless for entirely different reasons. Whether it be the moral depravity of 19th century Lodz, a heart-wrenching polemic on censorship, or a confounding examination of humanity, they’re all very much worth checking out if you get the chance.