With Polish recently declared the most widely spoken non-native language in England and Wales, the timing seems perfect for a UK-based celebration of the country’s cinematic expression. The annual Polish Film Festival, Kinoteka, is in its 11th year now and will be running during March; primarily in London with screenings also scheduled for Belfast, Edinburgh and Liverpool. The festival’s content will range from classics by Polish masters, to innovative new films, via live psychedelic scores, poster exhibitions and interactive workshops. Kicking off the proceedings at the Barbican Centre on Thursday 7 March will be a Gala Opening Screening of a newly restored print of Adrzej Wajda’s The Promised Land (1975). 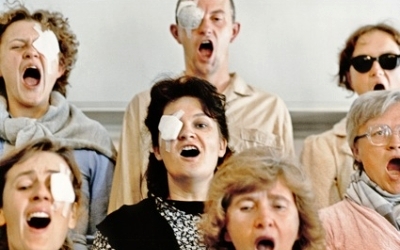 Later in the week sees outings for fellow Polish classics including Krzysztof Zanussi’s Illumanation (1973) and 1990’s Escape from the ‘Liberty’ Cinema, directed by Wojciech Marczweski. Besides these older works, the Riverside Studios in Hammersmith will be playing host to the New Polish Cinema strand, including Andrzej Jakimowski’s Imagine (2012), and Katarzyna Roslaniec’s Baby Blues (2012). Furthermore, the festival’s show-piece will be a preview screening of Michal Marczak documentary F*ck For Forest (2012) about a German organisation that pornography to fund ecological endeavours. The film is set for general release in the UK on 19 April, courtesy of distributors Dogwoof.

The festival will also incorporates the moving image experiments of artist Wojciech Bruszewski (at the Tate Modern), the animations of Witold Giersz (at the National Gallery) and a collection of Tomasz Opasinski’s film poster work (at the Riverside Studios), as well as workshops and a Closing Gala Ceremony in which electronic musician Andy Votel re-interprets a trilogy of Polish children’s films, entitled Pan Kleks.