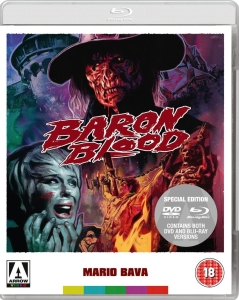 Spooky, cavernous castles; rolling, all-engulfing perma-mist; a deranged, deformed aristocrat impaling all the serfs to ease his crippling ennui…Giallo master Mario Bava’s camp schlockfest has more classic Gothic tropes than you can shake a Brontë sister at. Here given a beautiful restoration for Blu-ray and DVD by Arrow Video, Baron Blood (1972) provides a good bit of fun and a great deal of crash zooms, but maybe not quite enough shocks given his past history. Immaculately coiffured 70s Ken Doll Peter (Antonio Cantafora) has travelled to Austria from the States in an effort to rediscover the family roots. 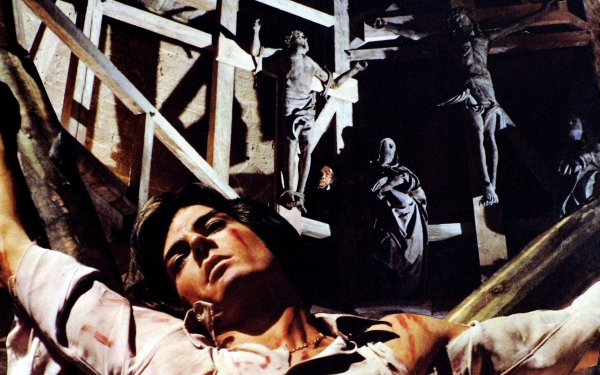 Taken by his Uncle Karl (Massimo Girotto) to the castle which belonged to ancestor Baron Otto von Kleist, Peter there meets Eva Arnold (Eike Sommer), an architect charged with restoring the building for use as a luxury hotel. But Old Otto had some faults back in the day. The nefarious nobleman’s penchant for torture saw a local witch he burned at the stake curse him to return from the grave, bearing the painful scars of his own grisly demise, should anyone utter a magic incantation. Sure enough, before anyone can say ‘worst idea in history’, Peter and Eva are summoning the Baron back on a lark, only for him to launch another killing spree.

Though the film features atmospheric moments – a foggy chase through the castle grounds and a séance sequence are full of creepy and affecting imagery – the majority is a bit too creaky and incoherent to grip. Some wonderful, ripe dialogue (“It is my duty as a Doctor to call you an ambulance!”) and the characters’ oddly indifferent reaction to a mad zombie sadist wandering about do little to inspire terror, but do raise an affectionate titter. Bava also creates scant fear or suspense with the Baron’s unthreatening, silent lumbering; even his horrific appearance given short shrift by an initial reveal sorely and surprisingly lacking in any directorial élan.

Joseph Cotten (Citizen Kane, The Third Man) pops-up at the halfway mark to add some class to the cast, his introduction to the narrative as not-so-mysterious philanthropist Alfred Becker making Scooby-Doo’s imbedding of villains look subtle. Cotten enjoys himself, while Sommer, Cantafora and Girotto also provide hammy pleasure as plotting becomes increasingly ragged towards the suitably madcap denouement. Baron Blood remains a daft and dorky romp, not without its charms.

Win a Blu-ray copy of Mario Bava’s Baron Blood with our latest competition. Follow this link to enter.