Beginning with a lengthy disclaimer distancing itself from the evidently non-plussed Stanley Kubrick estate, Rodney Ascher’s theory-laden docu-essay Room 237 (2012) falls somewhere between the redundant and the reverential. Offering up a series of curious readings into Kubrick’s 1980 horror classic, The Shining – ranging from the coercive to the downright crackpot – Ascher provides five of the late American director’s most feverish supporters with the stage needed to wax lyrical about the hidden messages and secret codes hidden within his labyrinthine tale of ghostly encounters and attempted familicide. 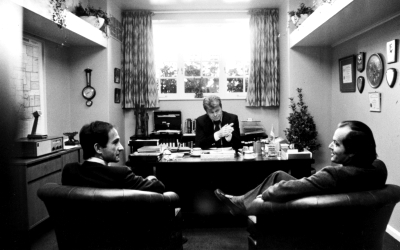 Never one to spell things out for his willing test subjects, Kubrick’s cinema is littered with arcane references and complex symbolism, often turning the everyday into the transcendental. Though fans of 2001: A Space Odyssey’s operatic pomp may beg to differ, seldom is this distinct filmmaking style more prevalent than in Stephen King adaptation The Shining, in which Jack Nicholson’s seemingly harmless family man transforms into a homicidal maniac, hell-bent on butchering his wife and child to death with his trusty axe. The cause of such a wild reversal of fortune? Ancient Native American spirits, the 1969 moon landings and/or minotaurs apparently, according to Ascher’s cocksure narrators.

As expected from a documentary offering a quintet of varying ‘truths’, consistency isn’t exactly Room 237’s strong suit. Whilst tall tales of Kubrickian references to racial genocide within The Shining feel vaguely believable (the iconography is certainly present throughout), allusions to Asterion – the Cretan Minotaur of Ancient Greek mythology – appears pure ‘pie in the sky’ thinking. The issue here isn’t that a group of individuals have each found their own points of interest within Kubrick’s teasing nightmare; cinema, more so than any other contemporary art form, opens itself up to continual discourse that transcends racial, social or geographical boundaries. The issue is that so few are substantiated with anything approaching tangible on-screen evidence.

Fun enough for those with even a passing interest in Kubrick’s lifework, Room 237 functions best as an affectionate testament to the beardy auteur’s canny ability to open up mainstream American cinema to the sort of ambiguity-rich storytelling more commonly found outside of the Hollywood system. Sadly, in refusing to tie off his narratives with neat little bows, The Shining and other such masterful works have now becomes the playgrounds of conspiracy theorists and contrarians.

Win a DVD copy of Rodney Ascher’s Room 237 with our latest competition. Follow this link to enter.