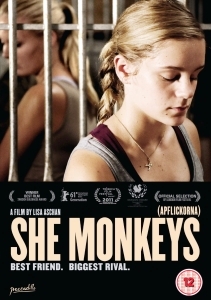 To caption Lisa Aschan’s debut feature She Monkeys (Apflickorna, 2011) as a tale of burgeoning sapphic desire amidst the intense world of equestrian vaulting is by no means erroneous. Originally produced as part of the Swedish Film Institute’s ‘Rookie Project’, it went on to receive high praise on the festival circuit. After reaching British cinemas last year, She Monkeys now arrives on DVD courtesy of Peccadillo Pictures. A complex examination of femininity, sexuality and control, it could hastily be likened to Darren Aronofsky’s Black Swan (2010), but replaces that film’s delirious bravura with a restrained but fierce intensity. 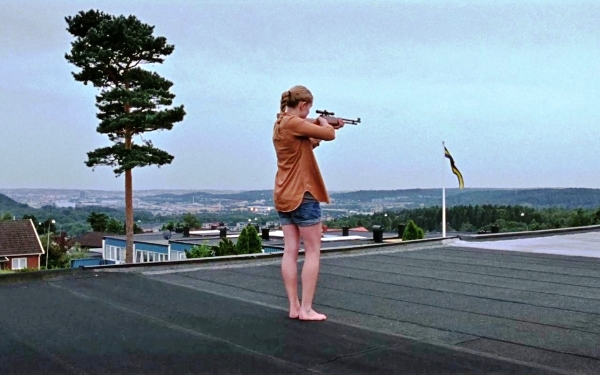 Emma (Mathilda Paradeiser) is introduced to the audience through a scene in which she puts an obedient canine companion through its paces. This act, the epitome of discipline and dominance, aptly sets up what is to follow – albeit with an additional carnal frisson. Emma arrives as the new recruit at her local equestrian vaulting club and is quickly taken under the wing of the team’s star performer Cassandra (Linda Molin). The two then embark on a fascinating relationship that conveys the awkwardness of adolescence and the thrill of sexual exploration whilst both characters struggle for dominion over one another.

In parallel to Emma and Cassandra’s suggestive camaraderie, the former’s younger sister Sara (Isabella Lindquist) is approaching adolescence herself and trying to comprehend the changes that lie ahead. Approaching an age where she now needs an upper half to her swimsuit, she resolves to finally make her affections known to her love – a much older cousin who often babysits. This provides some useful comic respite from She Monkeys’ taut central narrative, yet is also full of tender and touching observations. In fact, the performances are exceptional from the three leads as they create a compelling impression of these different emerging emotions.

What really raises the level of the piece however is the underlying threat ever present between Paradeiser and Molin; their relationship may be one of attraction, but it is also built on fierce competition and a desire to dominate. She Monkeys a great deal more complex than just a simple European coming-of-age drama. An impressive debut from all involved, Aschan’s film is really worth checking out.