★★☆☆☆
Despite the best intentions, Marcus Markou’s family affair Papadopoulos & Sons (2012) – made in conjunction with brother, Andrew, through Double M Films – was never likely to emulate the success here in the UK of Joel Zwick’s hammy yet humorous US comedy, My Big Fat Greek Wedding (2002). A far more restrained, London-based riches-to-rags parable, Markou’s film strains to be both comic and touching, often missing its marks by some margin. Game of Thrones’ Stephen Dillane heads up a relatively little-known cast as Harry Papadopoulos, a successful entrepreneur on the verge of losing everything. 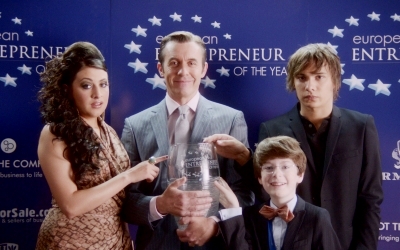 A self-made man, widower Harry has everything that his heart could desire: a plush mansion in the country, respect from his business peers and three well-rounded (if a little odd) children. However, when a major bank folds in the UK, Harry’s latest lucrative property development comes under jeopardy, leaving himself, his children and maid Mrs. P (Selina Cadell) destitute. Harry’s only hope appears to be the Three Brothers Fish & Chip Shop, a run-down shell part-owned by his estranged, freewheeling brother Spiros (Georges Corraface). Forced into burying the hatchet with his older sibling in an effort to make Three Brothers a profitable enterprise once more, Harry and co set off on an inner-journey of rediscovery.

Played out with unquestionable warmth and heart, it’s unfortunately the film’s screenplay and Markou’s limited resources that let Papadopoulos & Sons down. Harry’s Greek heritage (pleasing bouzouki soundtrack aside) is put very much on the back-burner from the off, reintroduced only at times when the narrative feels in need of a quick injection of comic relief. Rather than being an optimistic tale of functioning multiculturalism in contemporary Britain, what we get is a familiar family-bonding session; a father choosing happiness – for all involved parties – over an untold fortune. Whilst the message is of course a positive one, there’s little on show here to capture the imagination of those not involved in some way with the film’s admirable DIY production.

An unexpectedly melodramatic climax adds a saccharine edge to a film already dangerously close to being as syrupy as baklava; a shame, as there is certainly some worth to be found within Papadopoulos & Sons’ recession-hit high jinks. A solid production and distribution model may well see the workmanlike Markou brothers returning to UK cinemas with new projects in the near future. Let’s just hope their next outing has a little more up its sleeve beyond Papadopoulos’ simplistic and reductive ‘love conquers all’ didactic.