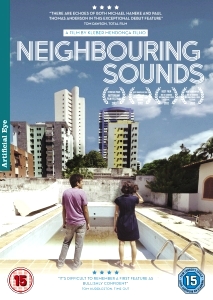 Taking place behind the high walls and security gates of an affluent district in the Brazilian city of Recife, Neighbouring Sounds (O Som ao Redor, 2012) is a taut social drama brimming with urban anxiety. It’s a fantastically assured debut from Kleber Mendonça Filho, who dexterously combines visual and aural manipulation to create a pervasive sense of dread. Eschewing the propulsion of traditional narrative, Filho instead opts for a sprawling mosaic that presents the lives of a dozen or so residents of a particular street, subtly taking the temperature of middle-class Brazil – a strata currently in a state of riotous flux.

Through its compulsive opening sequence, ties are grafted between today’s society and an old-fashioned way of life emphasis placed on contrasting strata. Monochrome photography of the prosperous and the penniless from decades ago are partnered with a beautiful gliding tracking shot in the present day city. It’s not just what the bourgeois are scared of losing now that is of concern here, but that with which they have already parted. Regular shots offer a glimpse at districts being engulfed by high-rise apartments, one of which houses local patriarch and sugar cane tycoon Francisco (W.J. Solha). 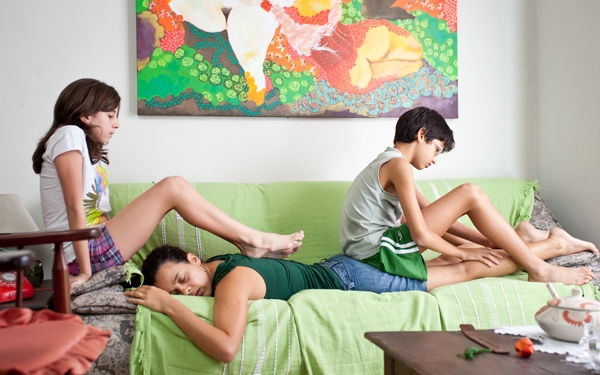 Family relations are charged with running day-to-day operations, with Francisco’s grandson João (Gustavo Jahn) also embarking on a fledgling romance with new girl Sofia (Irma Brown). Elsewhere, frustrated housewife Bia (Maeve Jinkings) finds coping mechanisms in the unlikeliest of household appliances, and all the while a security firm offers the street protection from crime through constant surveillance. From the off, Filho creates a palpable tension enhanced by some stellar sound design. From the hustle and bustle of a busy neighbourhood to more specific instances of phonic chicanery, Neighbouring Sounds is a delight to listen to, especially in tandem with the film’s restrained turns.

The unease is served nicely by the disconnect between the residents and their live-in help with several suggestions of moral vacuity on the part of the former. In the third act, the director lets loose a little with several more fanciful moments including a tour around a ruined cinema – complete with the soundtrack to a ghostly matinee – and a nightmare in which hooded youths invade a house in the middle of the night. A melodramatic turn during the finale may at first seem anticlimactic given what has come before it, but on reflection it provides a perfect retort to the middle-class paranoia.

Undercutting the nostalgia, it posits that it is perhaps not the shadowy figure creeping over rooftops that they need fear, but a past viewed through rose-tinted glasses. Utterly compelling from first minute to last, Filho’s Neighbouring Sounds is a must-see South American drama that firmly marks the arrival of an indisputable new directorial talent.

Win a DVD copy of Kleber Mendonça Filho’s Neighbouring Sounds with our latest competition. Follow this link to enter.