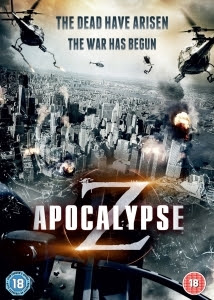 Luca Boni and Marco Ristori’s abysmal Apocalypse Z (2013) makes recent Brad Pitt blockbuster World War Z (2013), which tried manfully (if impotently) to transpose the walking dead to the mainstream, look like an Oscar-worthy literary adaptation. This slice of DTV schlock is truly woeful in every way imaginable – and then some. There’s really not much of a storyline here, so let’s not dwell on it for long. Suffice to say that a group of Neanderthal mercenaries are sent to a remote part of Eastern Europe by the American government, after an accident at a research plant turns the local populace into flesh-eating zombies. 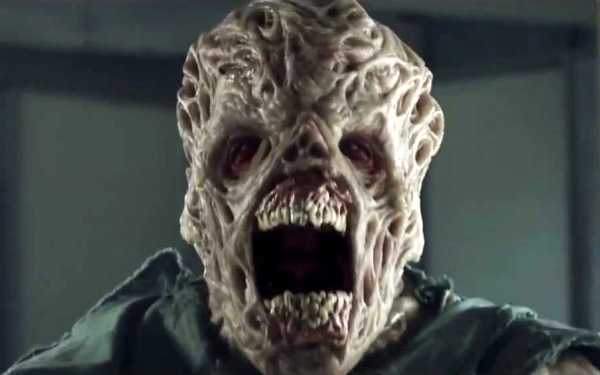 Under the impression that they’re there to wipe out the evidence by planting a nuclear bomb, the gang of ex-criminals soon discover that they’ve been-double crossed by the powers-that-be – and that the zombies are actually the least of their worries. So, let’s dissect the evidence of this lamentable production in the best mad scientist manner (there’s even one of those present as well). Firstly the zombies themselves. There’s little you can do with these horror stalwarts to make them appear fresh. Here, however, all the regular qualities you’ve come to expect have been jettisoned. These zombies run instead of shamble and can be dispatched with relative ease courtesy of a well-timed crack in the face with an iron bar.

Next up: the cast (of unknowns, Uwe Boll as US President aside). The male members of the group make certain well-known actors – who’ve progressed from body builders and wrestlers to more challenging roles – look like Shakespearian protégés. Of the five female characters? Well, one says nothing at all for all of the five minutes that she appears, whilst it’s about half-way through the film before the other, Eden (Tara Cardinal), speaks. As for the others? The film’s best performance may well come from an unnamed woman who becomes a zombie even before the opening titles – never to be seen again.

Round this all off with a mind-numbingly bad script which requires the cast to run around screaming expletives at every opportunity, and Boni and Ristori’s Apocalypse Z is the perfect justification for those who (incorrectly) belief that because you’re a horror fan, it follows that you can’t appreciate a clever, sophisticated or well-made film. For every Romero, Fulci and Boyle, it seems, there must inevitably exist a horde of lesser-directors unable to push their chosen sub-genre out of the bargain bins and into horror cinema history. Enough said, really.