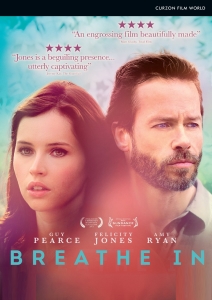 When Drake Doremus’ heartbreaking Like Crazy (2011) premièred at the Sundance Film Festival in 2011, the signs were encouraging; a Grand Jury Prize win as well as an all-night distribution bidding war. But despite this initial promise, Like Crazy became the unfortunate victim of the annual Oscar purgatory for films released at the height of award season without the nominations to provide the requisite box office aphrodisiac. Having already enjoyed a high-profile opening slot at the Edinburgh International Film Festival, ahead of this week’s theatrical release, Breathe In (2013) will hopefully avoid its predecessor’s fate.

A mature and expressive work, Doremus’ latest is a beautifully restrained marvel about the stifling disappointments of adulthood. Breathe In stars Guy Pearce as former rock musician Keith Reynolds, who has traded the uncertainty of life as a touring musician for the stability of the leafy upstate suburbs teaching music in a local high school. Yearning for the creativity and freedom of his youth, Keith auditions to play in the New York philharmonic orchestra and dreams of moving back to Manhattan, despite the reluctance of his devoted wife Megan (Amy Ryan) and swimming prodigy daughter Lauren (Mackenzie Davis). 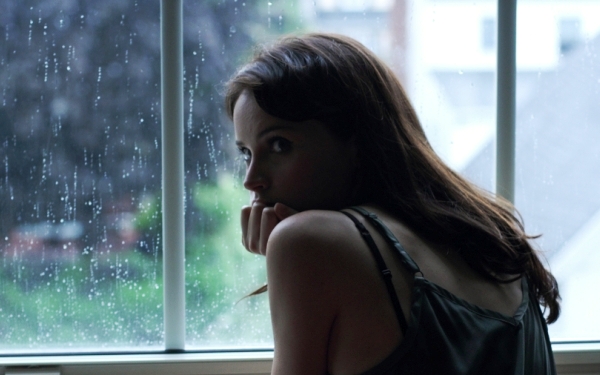 With Lauren’s departure for college fast approaching, the family dynamic is further disrupted by Megan’s decision to take in Sophie (Felicity Jones, soon to be seen in next year’s The Amazing Spider-Man 2), an English foreign exchange student, for the final term of school; a girl who unearths a dormant hunger in Keith. Doremus adroitly manages to circumnavigate the usual extramarital clichés inherent in the relatively conventional story by eschewing any wistful romanticism and concentrating on the resigned fatality of Sophie and Keith’s relationship. The director understands the connection between the pair but, crucially, he is willing to step back and consider the wider implications of the intense dalliance.

It becomes clear early on that the affinity between the pair is built on the two projecting their aspirations and frustrations onto each other. Sophie, an idealist, bored by the inane frivolities of her peers, exudes a sense of blunt, confessional honesty that is emblematic of the earnestness of youth; but it represents a sense of fearlessness and openness to Keith. Despite the age gap, however, it’s a convincing central relationship that never feels forced or overly stagy.

With Breathe In, Doremus captures the way passions ebb and flow with the varying degrees of realisation and cognisance. Much of the flirtation is about these ‘almost’ moments where the pair appear to be testing the other’s attraction, constantly moving in and pulling away. There’s an enquiring restlessness to Doremus’ camera, always searching for small gestures and glances which, along with Dustin O’Halloran’s beautifully forlorn score and DoP John Guleserian washed-out palates, creates a sensuous, longing atmosphere.