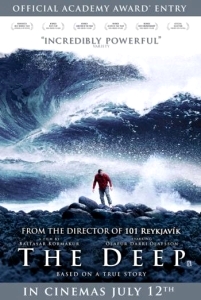 ★★☆☆☆
A filmmaker torn between intimate tales set in his native Iceland and big-budget Hollywood genre pieces (next up is the Mark Wahlberg/Denzel Washington actioner 2 Guns), director Baltasar Kormákur is back on familiar soil with ‘based on a true story’ survival drama The Deep (Djúpið, 2012). Sparsely plotted and unforgivingly sombre, Kormákur character study centres upon portly fisherman Gulli (Ólafur Darri Ólafsson), who is forced to endure the near-freezing temperatures of the Atlantic after his trawler is dragged under by a snagged net. Left alone to consider his seemingly imminent death, Gulli suddenly spies land. 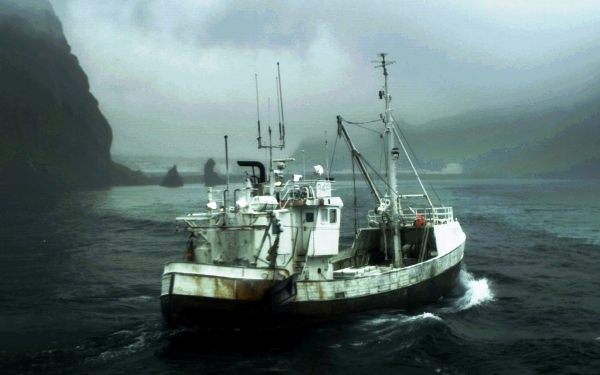 However, in a classic case of ‘out of the frying pan and into the fire’, our bedraggled everyman finds himself washed up onto a treacherous lava field, its long petrified magma transformed into razor-sharp daggers that tear at the feet of this unfortunate soul to ribbons. Staggering through this Hell on Earth, Gulli miraculously arrives back in his hometown to a hero’s welcome, lauded as half-man, half-seal. The toast of the 1984 scientific community, our shell-shocked hulk is prodded and poked in all manor of demeaning tests designed to unravel the great mystery behind his incredible feat of endurance (other than, of course, the fact that Gulli’s clearly carrying his own fair share of insulating body fat).

An intriguing ‘man versus the elements’ battle told in a distinctly uninteresting way, The Deep reaches its dramatic pinnacle roughly a third of the way in as Gulli’s beleaguered vessel capsizes. A stunning example of back-to-basics physical effect work, we reel and spin as the ship’s decks are pulled out from underneath us, the icy waters outside quickly claiming both steel and souls for its own. Unfortunately for Kormákur’s dramatic retelling his film peaks far too early, leaving the second half to drag its sodden feat towards an uninspired and unremarkable finale. Brief interview snippets with the real Gulli during the end credits ultimately prove far more watchable than what’s come before.

As technically impressive as it undoubtedly is, The Deep’s redundant final 45 minutes tell us almost nothing about Gulli’s character outside of his own sense of ‘survivor’s guilt’. A social outcast more comfortable conversing with solitary sea-birds than the complex townsfolk around him, our protagonist is watchable at all times thanks to a decent lead turn from Ólafsson (also seen in 2012’s Contraband), but remains hamstrung by Kormákur journeyman-like approach to an extraordinary triumph of human spirit.