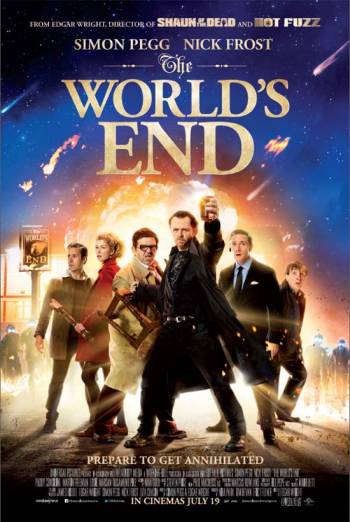 ★★★★☆
A fitting conclusion to the British director’s exceedingly loose ‘Blood and Ice Cream’ trilogy (see Shaun of the Dead, Hot Fuzz), Edgar Wright’s The World’s End (2013) successfully breeds the genre-soaked approach of the former with the small-town quaintness of the latter, plus that little added dash of flair that made 2011’s likeable Scott Pilgrim vs. The World such a visual treat. With regulars Nick Frost and Simon Pegg back on leading men duty, all the omens beforehand pointed towards another self-referential slice of ‘fried gold’. What we actually get is a heady, industrial-sized vat of Wright’s unique, morish humour.

Rounded up by prodigal lord and master Gary King (a dishevelled Pegg), four former school friends approaching the big ‘four-oh’ (Frost, Paddy Considine, Martin Freeman and Eddie Marsan) return to their humdrum rural hometown of Newton Haven to reattempt the fateful pub crawl that bested them one hazy night in 1990. Known as the Golden Mile, this chain of twelve taverns provides Gary with the perfect opportunity to relive his youth with the old gang. Despite the protestations of tee-total careerist Andy (Frost), the quest for the Holy Ale gets underway. However, little do the boys know that it’s not only them that have changed – but also the town’s strangely subdued glassy-eyed inhabitants. 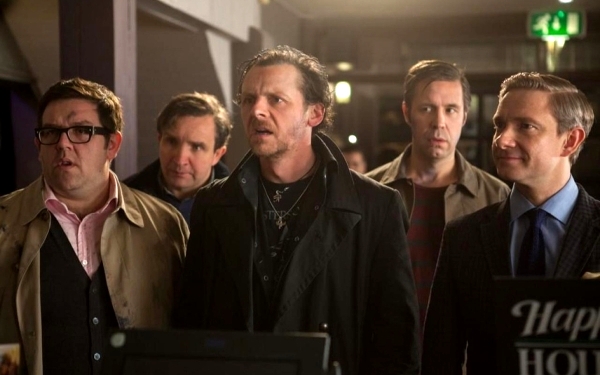 As with any Wright offering, half of the joy of watching The World’s End – and it is a joy, from first pint to last – is in spotting the myriad of pop culture allusions made to everything from kid’s television to sci-fi hallmarks. As is made apparent in the trailers promoting the film’s release, Wright has certainly taken great influence from the paranoia-laden suspense of Invasion of the Bodysnatchers, The Thing and The Stepford Wives in crafting his boozy, yet brainy night on the tiles. Proceedings are given a further, slightly more subtle twist courtesy of a strong Arthurian through-line (they don’t call him ‘the King’ for nothing), complete with its very own Guinevere in the guise of ex-classmate Sam, played by Rosamund Pike.

One thing that may not have come across so well during the film’s promotion is just how poignant and touching – when truly on song – The World’s End is capable of being. As was the case with Wright’s previous two trilogy entries, the emotional core of this third (and final?) chapter lies firmly in the relationship between Frost’s forward-thinking water-drinker and Pegg’s nostalgia-obsessed drunkard. Whilst not quite as heart-wrenching as the undying bromance between the pair in Shaun of the Dead, there are certainly several moments where a lump may well force its way into your throat in between the film’s hearty (and devilishly frequent) laughs.

As close as we’re ever likely to get to a feature-length outing of Wright’s seminal Channel 4 sitcom Spaced (look out for a few familiar faces), The World’s End has thankfully turned out to be the savvy, Cornetto-revering comedy large swathes of us hoped it would by. Arguably British cinema’s most rewarding genre director currently plying his trade, Wright has defied the odds to complete a trilogy that, as much for its constant quick wit as its loving/loved characterisations, may go on to be as fondly cherished as Krzysztof Kieślowski’s Three Colours series – his half-joked inspiration.