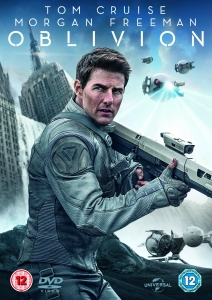 Post-apocalyptic dystopias have been somewhat en vogue in recent years, with the cinematic sci-fi landscape positively cluttered with barren and sparsely populated visions of Earth’s tragic future. That party has now been joined by Joseph Kosinski, who cut his directorial teeth on Tron: Legacy (2010) and whose sophomore feature, Oblivion (2012), arrives on DVD and Blu-ray this week. Based on an as-yet-unpublished graphic novel – also penned by the director – Oblivion contains some spectacular visuals, but sadly there’s little else to atone for a distinct lack of originality, character and/or unique ideas. 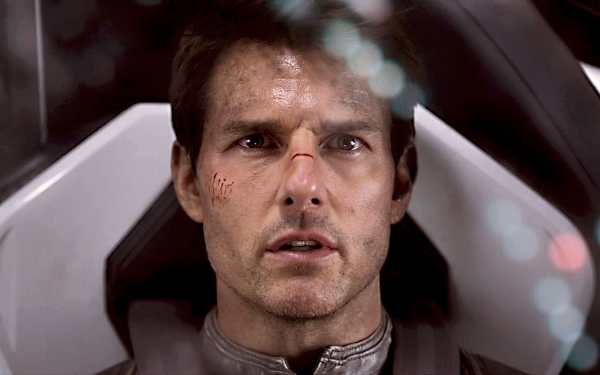 Pilfering from a range of superior science fiction, the plot revolves around Jack Harper (Tom Cruise), who lives on a war-ravaged and uninhabitable future Earth with his colleague/lover Vika (Andrea Riseborough). Half a century ago, the planet was devastated in a war against invading aliens – called ‘Scavs’ – and the populace was forced to flee to Saturn’s moon, Titan. Earth’s water  is vital to the far-off colony, so Harper has remained behind to repair autonomous drones that protect towering water processors from lingering Scav raiders. Jack’s obedience to off-world superior Sally (Melissa Leo) is then tested when a ship crash lands housing a mysterious woman (Olga Kurylenko) that Jack had previously seen before in vivid dreams.

It’s not a bad set-up for a sci-fi actioner, but sadly narrative dexterity is about as present in the ensuing 100 minutes as whip-smart dialogue and white knuckle thrills. Cruise and Riseborough do little wrong but are both on autopilot, scarcely inhabiting characters that have too little depth to stretch them. Cruise looks good in his futuristic jump suit, set against some astonishing Icelandic landscapes (doubling for a now-volcanic North America), but the human story lacks either the emotional resonance or haunted sense of longing that it’s ambitiously aiming for. Instead, Oblivion presents a plot with twists that are guessable from the trailer, and supporting players included for no reason other than exposition (see Morgan Freeman’s Beech).

It’s ultimately left to the production design to impress. The film’s clean, white, 1970s-style sci-fi chic all looks nice, but provides polish to a film in need of far more fundamental revision. With the mysteries of the Scavs and the ‘radiation zone’ fairly underwhelming from the outset, and the emotional landscape as desolate as the physical one, there’s hardly an engaging aspect to be found. It’s possible to appreciate Kosinski’s ambition and fans of the Cruise missile may find moments to enjoy, but Oblivion still leaves you wishing the Scavs had just won in the first place.