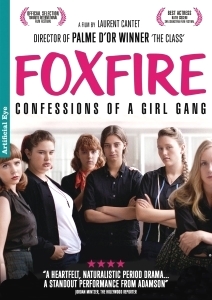 Having bagged the prestigious Palme d’Or prize for his last film, 2008’s vérité high school drama The Class, award-winning French director Laurent Cantet returns to selected UK cinemas this week with his new feature, Foxfire (2012). Based on Joyce Carol Oates’ novel of the same name, it shares some themes with the director’s previous piece, but trades modern France for 1950s America. In place of surly Parisian students, the tale presents an unruly gang of young proto-feminists in patriarchal upstate New York, but sadly fails to craft any particular drama of note, despite it seeming inevitable from the outset.

The pacing plays a decisive role in this aforementioned issue, with Cantet’s latest getting off to an engaging start before becoming listless, particularly during the second act; this is hardly helped by a cast of characters that lacks depth outside of the ringleader. It’s the sparky ‘Legs’ (an excellent Raven Adamson) who instigates the formation of the Foxfire girl gang along with friends such as quiet scribe Maddy (Katie Coseni), the butch and aggressive Goldie (Claire Mazerolle), and the naive Rita (Madeleine Bisson). 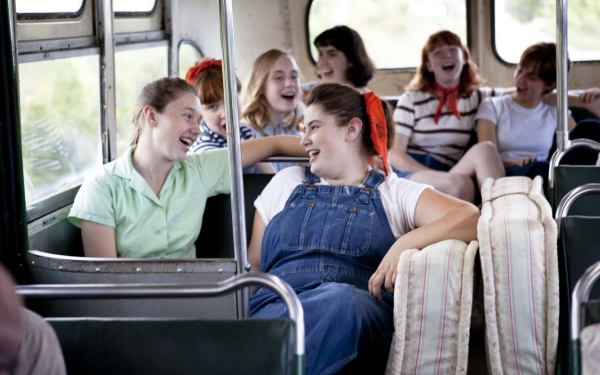 With their DIY tattoos, town-wide graffiti campaign and unique brand of justice, the Foxfire ranks soon swell. Railing against the sexism and inequality that were rife during the 50s, they’re in their element when teaching the oppressive men in their lives a lesson – but their exploits quickly escalate. Once this happens, Foxfire seems to lose much of its former direction, with the narrative tension dissipating as the characters themselves meander around. Despite Maddy providing the main, ponderous voiceover, Legs remains the only character exhibiting much in the way of charisma. The gang shifts through the gears taking in a stretch at juvenile hall, to extorting men with the aid of the group’s seductive blonde (Rachael Nyhuus).

The plotting almost finds its feet again with a divisive decision to intensify their activities further still. It’s proves all too little too late, however, and the screenplay remains littered with awkward dialogue scenes that the inexperienced cast often seem to stumble through. Whereas Cantet’s decision to use non-professional actors paid dividends in The Class, it seems to have quite the opposite effect on this occasion, with few of the young performers leaving much of a mark.

Cantet and his cinematographer, Pierre Milon, have certainly created an evocative small-town America for their characters to inhabit, but with a runtime in excess of two hours, it’s a place that they inhabit for far too long. Some tighter editing might have avoided the erosion of Foxfire’s opening energy, but the thin characterisation would persist being problematic. Still, Legs keeps things interesting and her suggested revolutionary future casts an interesting light on her rebellious motivations.