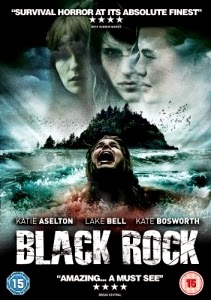 Ostensibly, Black Rock (2012) appears to present a gritty thriller via a noticeably female perspective. Directed by actress Katie Aselton (from a script via husband Mark Duplass) she is also one of the three main actresses whose characters form the flesh and bones of the narrative. Sadly, these potentially intriguing components fail in delivering something outside of the usual genre trappings, and a strong opening gives way to an abundance of clichés and predictable moments. Sarah (Kate Bosworth) invites her childhood best friends Lou and Abby (In a World’s Lake Bell and Aselton, respectively) to the titular island. 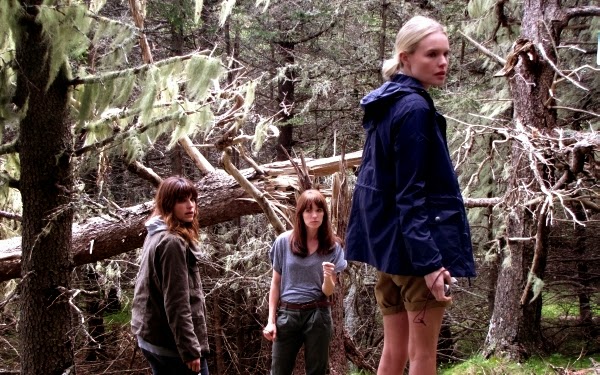 Hoping to heal a long-running rift between her buddies, Sarah promises a fun weekend ahead for them. The trio’s reconciliation and togetherness is short-lived when they run into three soldiers who have recently been dishonourably discharged from the military, while serving in the Middle East. With past tensions still bubbling under the surface, in an ill-conceived moment of flirtation, Abby finds herself having to ward off one of the overly aggressive males, resulting in tragic consequences. Pretty soon that once intended idyllic getaway turns into a fight for survival for the girls. If all this sounds overly familiar, that’s because it’s the same cat-and-mouse routine seen numerous times before by superior efforts.

Black Rock is competently made for the most part, and Aselton can wring out the obligatory moments of suspense when necessary (and all in a brisk 75-minute runtime), but there’s still nothing genuinely compelling or unique here. The loose and relaxed banter formed between the trio early on suggest that the film may head into Duplass brothers territory, with a semi-improvised, naturalistic tone playing against the usual tropes of the genre. Sadly, it doesn’t quite follow this sentiment through to the bitter end.

Some tasty group banter is discarded pretty early on as we’re treated to some silly and improbable character choices, and a resolutely B-movie denouement – complete with a psychotic villain who takes his sweet time to finish off his intended prey. In the end, it’s the committed performances from the three leads which lifts Aselton’s pedestrian Black Rock out of bargain bin purgatory. However, given the proven talent on board, it’s a shame that something a little more memorable and distinctive didn’t stem from this collaboration.