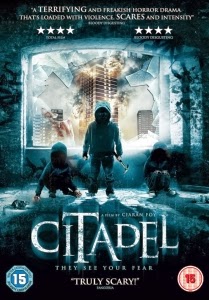 Council estates are gradually replacing graveyards as the setting of choice for contemporary horrors, whilst hooded teenagers are now the zombies of the 21st century. In Ciaran Foy’s Citadel (2012), the soaring concrete highrise is presented not as the impenetrable stronghold of the proletariat, but rather a noxious shrine to the purgative qualities of gentrification and the displacement of communities. The landscape of British horror has started to appropriate the kitchen sink aesthetics and class anxieties of home-grown dramas to pertinently reflect a nation confronted with austerity and social unrest.

Citadel’s tale of a young man struck by paralysing agoraphobia after witnessing his pregnant wife get attacked in a derelict housing estate (later dying after a nine month coma) looks to further these examinations of the dangers lurking in Britain’s ever widening urban jungle. Sadly, this tale of a widowed father teaming up with a discourteous priest in order to save his daughter from a gang of feral, hooded youths may well be set within this modern milieu of economic malady, yet its message is an alarmingly misguided delineation to the roots of this civil unrest. 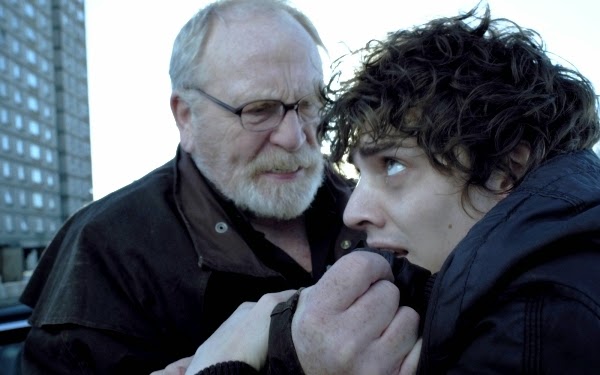 Social anxieties are effortlessly echoed through Citadel’s strong understanding of psychological horror. Using handheld cameras to stalks the film’s emotionally frail protagonist and portray this bleak council estate as an urban warzone, Foy has crafted a horror finely tuned to this state of contemporary unease. However, despite building a strong degree of empathy for his impressive lead (Aneurin Barnard’s offers an assured performance) and displaying a strong understanding of the genre, Foy’s cat-and-mouse, chiller is stilted by an amorphous moral subtext. Built upon the trepidation elicited form ultra-conservative tabloid headlines, Citadel feels like a reactionary conduit for subliminal right-wing paranoia.

Perpetuating the belief that gentrification is an entirely positive movement, Citadel leaves the audience confused as to who the film’s real antagonist is. These hooded monsters are breaking up families and forcing people out of their homes, yet this horde of youths are presented as one-dimensional malevolent antagonists. This vilification of an entire generation and their economic strata suggests that Citadel is seemingly rallying for the ‘removal’ of the lower classes. Fundamentally, this is a politically dangerous piece of filmmaking that plays upon certain fears and trepidations, carefully parcelling its ethically contemptible message in a seemingly innocuous envelope of derivative genre conventions.

It’s unclear whether Citadel truly understands the loaded message its broadcasting; clearly deafened by the overriding cries of “Broken Britain” to hear anything otherwise. By implying that austerity riots and social unrest amongst the underprivileged are natural consequences of economic hardship is to ignore that these are symptoms of a world that values equity over equality. Despite some mild scares, Citadel’s dangerously right wing rhetoric is more likely to have viewers partitioning for the disbanding of the NHS and the privatisation of the Royal Mail than quivering behind the sofa.