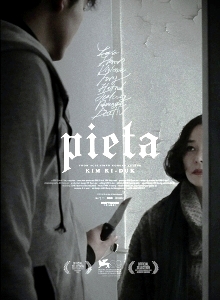 ★★☆☆☆
Winner of the sought-after Golden Lion at last year’s Venice Film Festival (to the surprise and chagrin of many an attendee), South Korean filmmaker Kim Ki-duk continues his voyage through dark, troubled waters with Pietà (2012), a spiky, often unpleasant tale of a vicious loan shark and his seemingly all-forgiving ‘mother’. Ki-duk’s personal problems have been well-documented in recent years (following a near-death incident involving an actress during the making of 2008’s Dream), and his latest film certainly carries with it it’s fair share of emotional baggage, even if it does show flashes of the director’s past ingenuity. 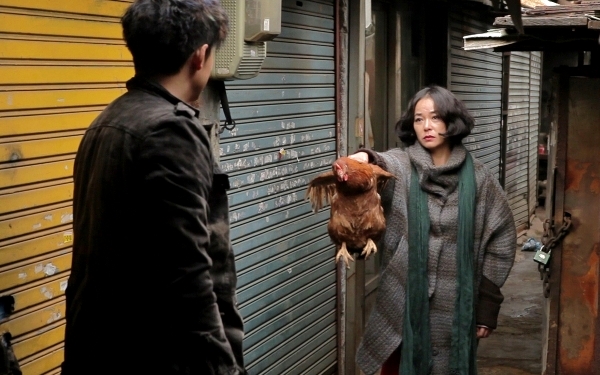 Gang-do (Lee Jeong-jin) spends his days terrorising the desperate and destitute, all of whom owe money to his unscrupulous money-lending boss. If they can’t pay up during Gang-do’s rounds they have two choices: allow themselves to be maimed in order to claim on their insurance policies, or pay with their lives. Our protagonist is cold, undoubtedly twisted and entirely unlikeable, which makes it all the more surprising when a mysterious middle-aged woman, Mi-son (Jo Min-soo, her performance the film’s sole highlight), enters Gang-do’s life claiming to be his birth mother. After an unforgivable act of sexual violence against the woman, Gang-do finally lets his guard down and a relationship (of sorts) begins to blossom.

An allusion to the Christian image of the Virgin Mary cradling the lifeless body of Christ, Pietà‘s biggest faux pas is considering itself high art rather than exploitation cinema. Gone are Arirang’s revealing bouts of anger and frustration, usurped by hopelessly bleak nihilism and near-intolerable cruelty. Self-mutilation (now a recurring theme of the director’s – see the furore surrounding his latest film, Moebius, which screened out of competition at Venice this year) rears its ugly head once again in a stomach-churning scene involving Mi-son’s literal ‘pound of flesh’, whilst an assortment of animals are butchered in front of the camera for questionable affect. As the plot thickens things do pick up slightly, but at no point do you feel like you’re watching anything even vaguely enlightening – a crying shame when looking back upon Ki-duk’s finest offerings.

Die-hard devotees may still find some vague form of enjoyment lurking beneath Pietà‘s drab and depressing exterior, but for the majority there’s little on show here to make it worth wholly recommending. There’s clearly an attempt made by Ki-duk to engage with South Korea’s hard-up suburban communities, and one character’s desperate pleas for Gang-do’s help in crippling him (in order to secure a fat pay-off from his policy) is comic even in its pitiful perversity. Sadly, glimmers of intrigue aside, this is one of the more forgettable entries in the prolific director’s already swollen oeuvre.