Following the dreadful A Burning Hot Summer which showed in competition in 2011, Philippe Garrel returns to the Lido with Jealousy (La Jalousie, 2013), a modest relationship drama of love and betrayal. Garrel casts his son in the lead role of Louis, a struggling actor who we see splitting with his girlfriend and the mother of his young daughter, Charlotte (the excellent Olga Milshtein). He enters a new relationship with Claudia (Anna Mouglalis), also an actress, but someone whose work has dried up and whose luck seems to be up. As Louis rehearses for a play, Claudia becomes insecure – not entirely without reason. 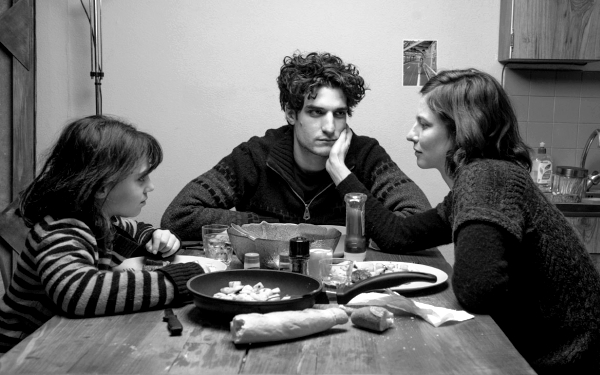 Louis is a man who finds it easy to attract women – a mother in the cinema where he takes his daughter to watch kid’s films gives him her telephone number – and has form when it comes to betrayal. However, he does love Claudia and so when it becomes apparent that she is now betraying him, he is cast into a deep depression. Shot in black and white, Jealousy is an old-fashioned relationship drama that could easily have been made in the twenty years following the Second World War. In fact, Garrel has spoken of taking inspiration from the story of his father, who had left his mother for another woman who in turn left him. Louis, however, is not privileged as a protagonist, and we see Claudia’s life with his daughter in his absence.

The acting throughout is supremely naturalistic, and the social milieu of both family life and the theatre are carefully observed and lightly rendered. A key scene sees Charlotte and Claudia meet for the first time. It’s amusingly and warmly played, but we also follow Charlotte home where her mother has prepared soup and the taut little vignette – as the mother and daughter deal with their own shifting affections, allegiances and insecurities – is pitch perfect. Like a mid-period Woody Allen film but without the jokes, with Jealousy Garrel has created an intimate portrait of flawed thirtysomethings navigating their way through the limits of love, faithfulness and happiness, as the creeping shadow of maturity and failure drifts over them.

The Venice Film Festival takes place from 28 August to 7 September 2013. For more of our coverage, follow this link.