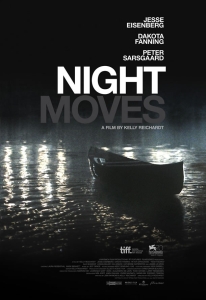 Following her 2010 revisionist western Meek’s Cutoff, Kelly Reichardt is back in competition at Venice with Night Moves (2013), an offbeat thriller about a small group of eco-terrorists who plan to blow up a dam. Josh (Jesse Eisenberg) is a worker at a communal organic farm, Dena (Dakota Fanning) is a radicalised rich girl working at a spa, and Harmon (Peter Sarsgaard) is the senior member of the trio, an ex-marine with bomb-making credentials and a hippy mentality that seems like a throwback to the sixties. Reichardt never satirises the triumvirate, nor takes them less seriously than they take themselves.

The community Josh lives within is sympathetically portrayed and there are no cheap shots. The progress of their bombing plot is also meticulously followed as ammonia nitrate fertiliser is acquired and a speed boat procured. The latter gives Night Moves its blandly off-putting title: no doubt an allusion to the 1975 Arthur Penn thriller of the same name was also intentional. The inspiration of seventies thrillers can certainly be felt; this is a serious thriller about starkly real people doing believable things. The entire build up to the planting of the bomb is meticulously crafted, but Reichardt’s latest also deftly shows the world against which they are rebelling (the man advertising milk; the families in their motorhomes watching television).

Eisenberg is perfectly cast here, his Josh a flip-side reaction to the Mark Zuckerberg of David Fincher’s The Social Network (2010). Eisenberg gives the role a hunched intensity of utter determination, convinced of his own rightness and blinkered to his plan’s intrinsic flaws. Fanning is similarly successful as the ‘baby face’ of fanaticism, sweet-talking her way around a suspicious supplies store owner with the breezy confidence of the entitled. Elsewhere, Brit Sarsgaard lends his Lebowski-like vet a seedy charm and humour, though his character is perhaps the most familiar.

Unfortunately, the second half of the drama flags substantially as the group begins to unravel following the unforeseen consequences of their actions. The efficacy of the plot is immediately shown up by the critique of Josh’s boss: “That’s just theatre.” Josh’s paranoia and Dena’s panic and regret lead the film into a well-worn melodramatic rut which Reichardt does her best to shoot through with originality. Despite its imperfections, her Night Moves remains a fiercely intelligent thriller and a thoughtful meditation on the folly of good intentions turned bad.