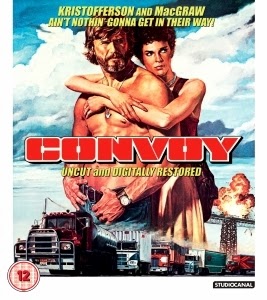 ★★★☆☆
Based on the popular song of the same name by C. W. McCall (yes, really), Hollywood hell-raiser Sam Peckinpah’s Convoy (1978) gets an unexpected DVD and Blu-ray rerelease this week through StudioCanal, presumably opening up this kitsch cult truck-a-long to a slightly wider – and younger – demographic. Starring Kris Kristofferson as the ridiculously monikered Martin ‘Rubber Duck’ Penwald, Ali MacGraw as his ‘girl’, Melissa, and the late Ernest Borgnine as pantomime villain Sheriff Lyle ‘Cottonmouth’ Wallace, there’s more than a dusting of camp kudos to this throwaway guilty pleasure. 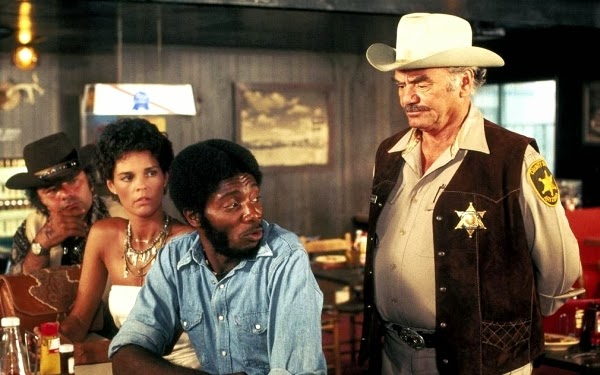 As foreshadowed in McCall’s seventies pop hit, Convoy follows an enormous, snaking congregation of dust-raising truckers as they heads for the State line following a diner brawl with the dastardly Sheriff Lyle and his posse of slimy cronies. Led by legendary road warrior ‘Rubber Duck’ (a particularly blue-eyed Kristofferson), this vast mobile army gather together in protest against local police corruption and trucker persecution, unwilling to disband until their swiftly-formed demands are duly met. However, Lyle has no intention of allowing his arch nemesis to reach the Mexican border, coordinating a state-wide manhunt for ‘Rubber Duck’, ‘Pig Pen’ (Burt Young), ‘Spider Mike’ (Franklyn Ajaye) and Widow Woman (Madge Sinclair).
Though relatively innocuous and inconsequential when held up against Peckinpah’s crowning directorial achievements (The Wild Bunch and Straw Dogs immediately spring to mind), Convoy still just about works as a goofy cat-and-mouse chase with a loose social conscience. Very much in the same mould as James Fargo’s Every Which Way But Loose (released, coincidentally, in the same year) and Hal Needham’s The Cannonball Run (1981), the open road is richly romanticised throughout, heralded as the last remaining sanctuary for Penwald and his endangered band of merry misfits.
Though veering into corny territory on more than one occasion, there’s definitely something admirable about the film’s progressive politics – even if it is more concerned with overturning tankers and destroying sheriff stations in the long-run. An entertaining joyride if you’re willing to overcome its plentiful flaws (and some iffy performances, Kristofferson and Borgnine aside), Peckinpah’s penultimate feature is hardly one of his most memorable, but Convoy’s big stunts and even bigger personalities should help ensure its place as a credible side note to the slow-motion-loving director’s vibrant filmmaking career.
Daniel Green
Facebook
Twitter
Pinterest
LinkedIn
Go to mobile version