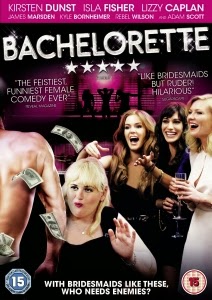 ★★★★☆
Having followed in the pioneering wake of Ben Wheatley’s A Field in England with a day and date cross-platform theatrical/digital-only UK release, Leslye Headland’s gloriously catty Bachelorette (2012) was predictably marketed as a Bridesmaids-style, female-centric comedy. However, whilst the latter is certainly true, this is a far edgier offering than Paul Fieg’s 2011 crowd-pleaser, reuniting a quartet of high school pals (the ‘Bitch Faces’) for the bachelorette party and subsequent wedding of one of their number. Cruel, callous and cutting, Bachelorette’s best laughs come from the resurgence of petty past grievances. 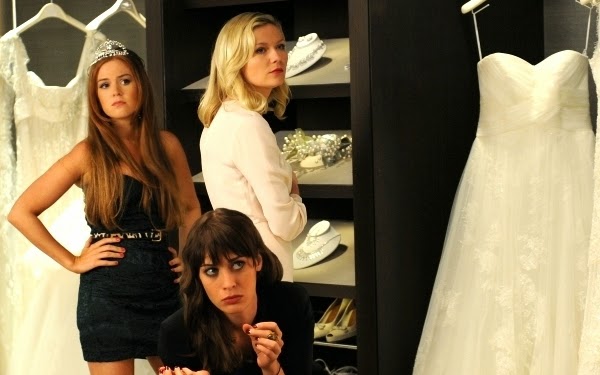 The first of the foursome to marry, Becky (Rebel Wilson) invites her former high school clique to celebrate her impending union with strapping sweetheart Dale (Hayes MacArthur). First to accept is highly-strung maid of honour Regan (Kirsten Dunst), with LA waster Gena (Lizzy Caplan) and party girl Katie (Isla Fisher) also accepting the chance to get loaded at their friend’s expense. Dismayed by the idea that Becky’s bachelorette may just be a low-key gathering, a coked-up Gena and Katie hatch a plan to spice things up – with disastrous consequences. As the pre-wedding shindig gets evermore out of control, the trio of women begin turning on each other in order to conceal their own vulnerabilities and failings.

Whilst Headland’s barbed bridesmaid bash may turn off those with a low threshold for sniping sardonicism, Bachelorette’s winning blend of broad comedy and pitch black cynicism certainly feels like a breath of fresh air in a sub-genre so often stifled by ripe sentimentality. The past of each of the four former school chums is littered with drug abuse, alcoholism, self-doubt and self-harm, a vicious cocktail of paranoia and mistrust that have splintered the group before the wedding invitations are even extended. Dunst is superb as queen bee Regan, a turn with more than a hint of her disconnected, at times effortlessly cruel central role in Lars von Trier’s depression opus Melancholia (2011). It’s also good to see Rebel Wilson reigning it in as the ‘straight one’, with Caplan and Fisher both on top form as the bruised and battered black sheep of the posse.

Destined, it would seem, to live forever in the shadow of Fieg’s box office smash hit, Bachelorette is arguably the superior film: sharper, funnier and with a bitterness that would make a lemon weep with ineptitude. Headland’s original stage play even predates the conception of its rival, and it’s a genuine shame that audiences haven’t been able to sample the terrific tartness of one before the undoubted gross-out delights of the other. A bold UK exhibition strategy, including its DVD and Blu-ray release this week, should help ensure, at the very least, that those intrigued have swift, direct access to one of this year’s best unsung American comedies.