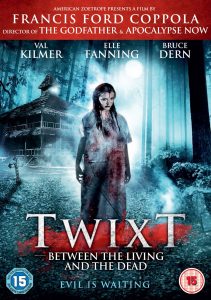 Francis Ford Coppola continues his descent into filmmaking obscurity with Twixt (2011), an intermittently handsome horror starring a waning Val Kilmer and an ashen-faced Elle Fanning that surprised many when included within Cahiers du Cinéma’s rundown of 2012’s best new releases. Described by local sheriff Bobby LaGrange (Bruce Dern) as a “bargain basement Stephen King”, witchcraft novelist Hall Baltimore (Kilmer) is currently suffering from writer’s block. He can only dream of achieving such a disparaging accolade as he sits surrounded by unsold copies of his new novel at a low-key book signing.

However, this reproachful sheriff might hold the inspiration Hall’s been waiting for, informing him of a mysterious murder that’s recently occurred in the town. That night an ethereal nymphet (Fanning), sporting orthodontic-adorned fangs and going by the nickname of ‘V’, enters Baltimore’s dreams. Despite being unsure of just how her presence relates to the recent homicide, Hall begins to thrash out a vendible narrative conjoining the duel themes of murder and vampires – an unquestionable money-spinner that even the late, great horror writer Edgar Allan Poe (Ben Chaplin, via another vivid apparition) seems to approve of. 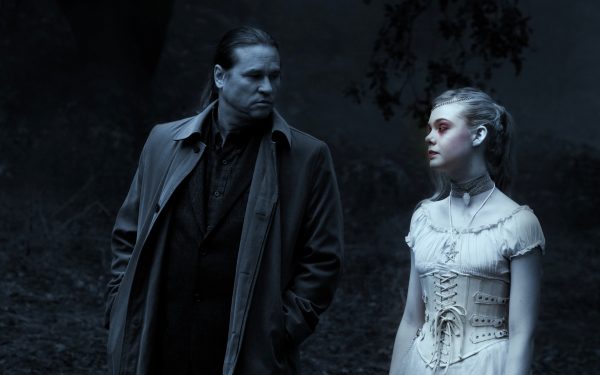 Coppola’s latest curious addition to his contemporary canon (often described as a forerunner of the ‘DTV auteur’ movement) is perhaps his strangest film to date. The protagonist here, played with hilarious zeal by a declining Kilmer, is a man who chooses to abscond into the realms of his own imagination in order to escape his everyday woes and search for inspiration – be that for his work or in order to somehow make existence a more palatable experience. It’s difficult not to see this as Coppola projecting his personal disenfranchisement toward the industry as a whole, ultimately turning Twixt into a curiously example of autobiographical filmmaking, conceived within an admittedly alluring framework.

Coppola had originally conceived the film as a “live editing” experiment, using digital techniques in order to act as the film’s ‘conductor’ during each screening. Curiously however, this is a film that completely disregards the audience in favour of a far more indulgent approach. Coppola’s recent output has seen him rip up the industry rulebook, yet Twixt is an all-out affront to traditional film language. Coppola’s more avant-garde agenda boasts a few genuinely striking scenes (the town’s seven-faced clock tower and a black and white moonlit stroll shared by Hall and V are both memorable highlights), but they’re merely the glue that holds together this confused amalgamation of genre reverie and mischievous experimentalism.

A clunky narrative and stilted performances are made more apparent by superfluous camera angles, including gauche split screen conversations over Skype (!?) and straight-to-camera soliloquies that represent Baltimore’s debilitating writer’s block – with jolting, abnormal edits only fracturing the narrative further. Is this a genre parody, a tongue-in-cheek assault on conventional filmmaking or has Coppola simply forgotten how to make coherent films? Regardless, Twixt greatly benefits from its impish sense of tomfoolery. While the results may well be a dissonant affair, it’s an entertaining mess to watch unfurl.