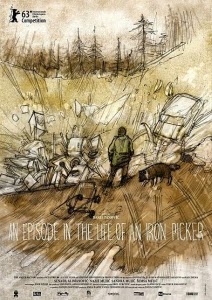 An Episode in the Life of an Iron Picker (2013) is the fifth feature from Academy Award-winning director Danis Tanovic. A darkly naturalistic piece of social realism, Tanovic’s latest examines the discrimination of the Roma community and the oppression of the socially underprivileged in his native Bosnia and Herzegovina. Nazif (Nazif Mujic) struggles to provide for his family, literally scraping together whatever he can harvest from the streets and forests of this rundown village to sell at the local scrap merchant. With two young daughters and a wife pregnant with their third child, Nazif struggles to put food on the table. 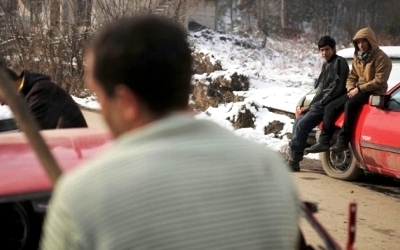 One day, Nazif returns home to discover that his wife is unwell. He takes her to hospital, where the prognosis reveals that she’s had a miscarriage and is in a critical condition. They could operate on her straight away, however, Nazif doesn’t have health insurance and with the operation costing a small fortune, he’s unable to see a way out of this devastating situation. In March 2008, Tanovic formed his own socially liberal and multi-ethnic political party called ‘Our Party’ (Naša Stranka). However, even without prior knowledge of his activist roots, it’s clear that Tanovic has a political agenda he’s incredibly passionate about. Based on a true story and starring the actual family involved, this docudrama is told with both purpose and sincerity.

During one of the film’s final moments, a workman’s ladder smacks into the side of the camera, yet Tanovic intentionally keeps this blooper in the final edit as a gentle reminder to the audience of just how real this piece of cinematic storytelling really is. Sadly, this commitment to realism results in a lifeless exercise in sociopolitical anthropology, with minimal dramatic urgency or enjoyment. This isn’t to say that Tanovic’s An Episode in the Life of an Iron Picker isn’t without merit, or that its message lacks importance. However, thanks to a collection of disengaging characters and curiously muffled emotions, the yearning to take heed of these issues is sadly resigned to the recesses of our consciousness.