Welshman Ivan Locke (Tom Hardy) is a site manager for a major building project; a family man with two young sons who’re waiting for their father to return home to watch the big game. On the way back, Locke turns right instead of left and heads off the motorway. Having made a decision that will change his life forever and armed only with his mobile, our protagonist tries to rectify the mess he’s made of things. Dirty Pretty Things screenwriter Steven Knight’s second feature, Locke (2013) has the kind of appealing, stripped-back premise (like Rodrigo Cortés’ 2010 offering Buried) which is almost a technical challenge. 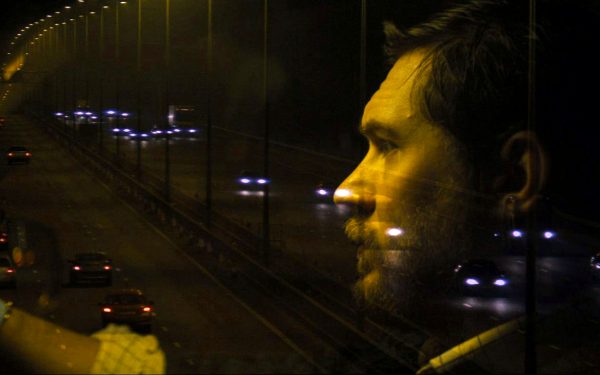 Knight’s latest endeavour is ostensibly ninety minutes (more or less) of one hypnotic actor in a car, driving through the night and speaking to a number of people. But Hardy and his director – who also wrote the screenplay – pull it off magnificently, creating a gripping piece of steering wheel (rather than kitchen sink) drama featuring a rich and complicated central character and a narrative which avoids cliché, abundant in both humour and heartfelt emotion. Locke is a road movie with none of the generic tropes. There are no encounters, nor accidents. “The traffic seems okay,” he repeatedly tells the woman (Olivia Colman) he is driving to see. He’s a man who loves his work and whose departure may well cost him everything.

Even with such high stakes in mind, in his car Locke talks a workmate through the preparations for what will be a massive concrete pour the next day. “You can’t rely on God when it comes to concrete,” he tells Donal (Andrew Scott). Locke’s work sections are superbly done – never would one have guessed a concrete pour could be made not only dramatically interesting but almost vital – and Hardy is utterly convincing as the high-end building supervisor who knows how to get the job done, cementing his reputation (if you will) by extending his range from the gross physicality of The Dark Knight Rises’ Bane and Charles Bronson to that most difficult of things: normal.

Locke is the old-fashioned sort, lyrical in his language and a “solid” man; one who restrains his emotions, telling his son he loves him but not repeating it when the boy is distracted by the football. However, he’s also a man who has failed by his own estimations. Haunted by thoughts of the dead father who abandoned him, Locke has made himself into a model of efficiency, honour and calm. Talking to his distraught wife, Katrina (Ruth Wilson), he insists on moving to the “next practical stage”. Trapped in his car by his own moral code, he’s resolved to put things right.