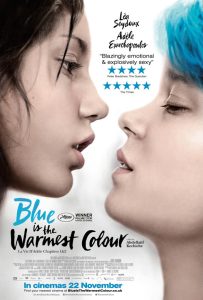 ★★★★☆
A well-publicised spat involving its two lead actresses and their director may have taken some of the sheen off a remarkable Palme d’Or win at this year’s Cannes Film Festival, but Abdellatif Kechiche’s Blue Is the Warmest Colour (2013) has lost none of it raw, vibrant appeal in the eyes of those ready, willing and able to look beyond the controversy. Offering up a pair of central performances so enrapturing as to command a two-thirds share on Cannes’ crowning accolade, rising talent Adèle Exarchopoulos and seasoned professional Léa Seydoux are more than believable as the film’s living, breathing in-and-out-of-lovers. 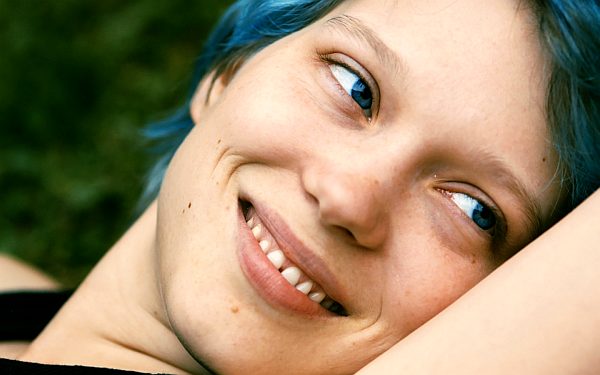 The hugely impressive Exarchopoulos plays namesake Adèle, a compulsive 15-year-old with lofty ambitions of becoming a writer. Intoxicated by food and literature in equal measure, Adèle struggles to muster up the same enthusiasm for the opposite sex from admittedly slim pickings. After several unsatisfying fumbles with one handsome but juvenile classmate, our protagonist eventually finds fulfilment in the arms of Emma (Seydoux, Midnight in Paris), an azure-haired artist several years Adèle’s senior. As the couple’s infatuation intensifies and thoughts move to the future, however, it gradually becomes apparent that the two girls’ differing dreams and aspirations may eventually put them on a collision course with conflict.

A vivid portrait of modern love that defies superficial labels and categorisation, Kechiche’s Blue Is the Warmest Colour is a film obsessively preoccupied with life’s plethora of heavenly delights. Though its handful of extended sex scenes have predictably – if disappointingly – dominated the majority of press coverage since Cannes, this is just one facile element of Adèle’s insatiable hunger for all things pleasurable. Coasting at school through her mid-teens, it’s only with the chance introduction of Emma that Adèle’s eyes are opened to a larger, liberal world of art, cuisine (oysters) and carnal experimentation. And yet, as the years pass by courtesy of one substantial leap in time, those external pressures that affect us all – our chosen career path, financial stability etc. – begin to take their toll on the women’s tumultuous relationship.

Adèle, soon toiling as a teaching assistant rather than following her literary dream, finds it ever more difficult to get close to the successful Emma, whose installation work now appears to have taken priority. Having taken such a risky chronological jump, the second half of the story arguably amounts to less, slipping into melodrama more easily than is initially expected. Mistakes are made by both fallible parties until the couple reach breaking point, all washed over by a steady flow of tears that – though undoubtedly cathartic – feel a little overblown given the nuance and subtlety of the first chapter. Thankfully, taken as a whole, Kechiche’s many triumphs outweigh his film’s minor missteps. An epic yet deeply relatable human drama, Blue Is the Warmest Colour offers far greater riches than its public notoriety would have you believe.