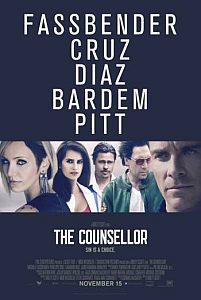 Before anyone thrusts another rusty sabre into Ridley Scott’s controversial crime caper The Counsellor (2013), it’s worth remembering that his brother and business partner Tony Scott passed away midway through production. Although from a reviewer’s point of view such an event shouldn’t have any bearing on the critique of the finished article, it’s reasonable to assume that his brother’s death had a profound effect on the director. The Counsellor is undoubtedly a film peppered with flaws that blows hot and cold from one scene to the next, but despite its many bizarre eccentricities, it still manages to hang together – just. 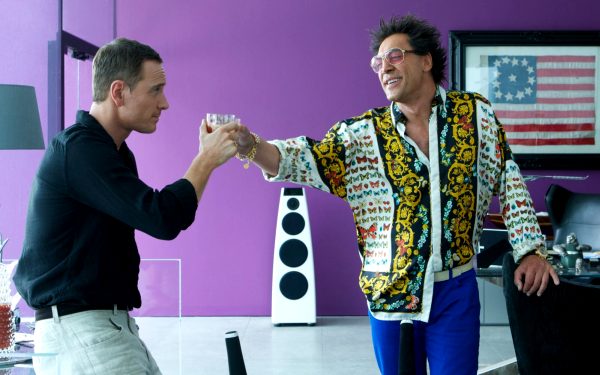 Michael Fassbender plays the counsellor in question, a successful lawyer who enters into a $20 million dollar cocaine deal with his high-spirited client Reiner (Javier Bardem) and Mexican cartel middle-man Westray (Brad Pitt). Despite advice from both Reiner and Westray that such illegal activity could put his future bride Laura (Penélope Cruz) – as well as his career and immortal soul – in jeopardy, driven by self-acknowledged ambition and greed the counsellor carries on regardless. However, when the plan inevitably goes awry, his partners’ predictions quickly come true. Bardem and Pitt are typically louche and charismatic, while Fassbender’s counsellor is a paradox of ice-cold charm and hopeless romanticism.

Cruz is underused in a role that needed more fleshing out, but it’s Cameron Diaz’s performance as cheetah-loving puppet master Malkina that will make or break The Counsellor for many viewers. She’s certainly seductive in spells and delivers some acidic one-liners, but you also have to wonder what another, more versatile actress may have done with the role. With regards to the script, Cormac McCarthy’s familiar brand of gallows humour and existential philosophy may be a joy on the page, but filtered through actors and spoken aloud it’s frequently preposterous. As Harrison Ford once famously remarked to George Lucas during the making of 1977’s first Star Wars film, “George, you can type this shit, but you sure as hell can’t say it”.

Direction-wise, Scott almost always paints an aesthetically pleasing picture and the action sequences here are as tense and brutal as any seen recently – though a few may question several editorial decisions. The random scenes and characters that appear and disappear with little explanation could be part of Scott/McCarthy’s grand design to disorientate the viewer, or they could be a sign of a filmmaker who had the wind knocked out of his sails and slipped into carelessness. Either way, The Counsellor might not up there with Scott’s most accomplished work, but there remains plenty on show to digest and discuss.