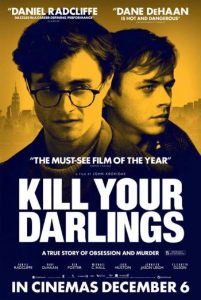 Beat literature and its purveyors have had a long and varied relationship with the silver screen which has seen no less than three films about them in the last few years. James Franco accepted the challenge of the lead in Allen Ginsberg pseudo-biopic Howl (2010), whilst Walter Salles took on the unenviable task of bringing Jack Kerouac’s “unfilmable” On the Road (2012). Now, first-time director John Krokidas tackles the formative years of the movement in his fairly standard period piece, Kill Your Darlings (2013), which boasts an impressive cast including Daniel Radcliffe, Dane DeHaan, Ben Foster and Michael C. Hall. 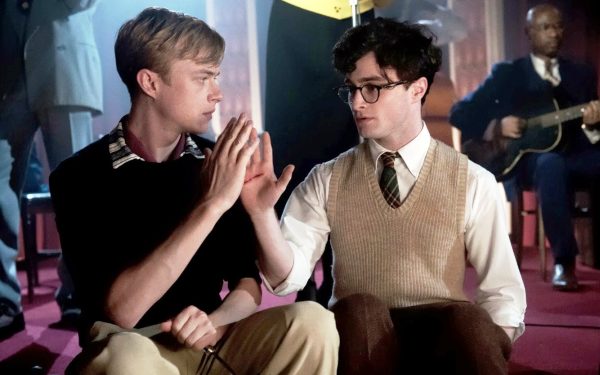 Allowing Radcliffe to side-step the perilous duty of imitating Ginsberg’s distinctive voice, this is Beats: Year One. The young poet is accepted into Columbia to study and there falls in with the effete and seductive Lucien Carr (DeHaan). Through his new friend he comes into initial contact with recognisable names Jack Kerouac (Jack Huston) and William Burroughs (Ben Foster) in the search of a “new vision”. Whilst the tenets of their literary philosophy are trotted out during various meetings their nascent group, trouble is on the horizon in the form of Carr’s obsessive lover David Kammerer (Hall). Based on these events, Kill Your Darlings is an enjoyable watch without ever doing anything especially interesting.

The tale of these household names becoming embroiled in a murder investigation is an intriguing proposition – at least for those not previously familiar with it. Taking a look at the formative years of these writers (before Burroughs‘ own murder scandal or Kerouac’s trans-American odyssey) to see what inspired them, is also, objectively, a fresh perspective. However, the clacking of typewriters and smoking of cigarettes have now become so synonymous with the Beats as to broach on cliché and the film does little to dispel those associations. What’s more, for a film in which a group of subversive artists begin their journey towards trying to reshape their art form, Krokidas has, it seems little intention of his own innovations. He directs solidly, rather than spectacularly or inventively.

What Kill Your Darlings does have going for it, are the performances. Daniel Radcliffe is very good as a ‘pre-Ginsberg’ Ginsberg with an almost flawless accent. He is more than supported by Dane DeHaan’s fantastic Carr, utterly justifying the other characters’ infatuations with him, and Foster, Hall, Huston and all provide good support. The female characters (Elizabeth Olsen and Jennifer Jason Leigh) are underused – as was the wont in the Beat boys club, and films about them. It merely compounds the impression that we’re getting little that’s original, even if what we see is of a high calibre.

This review was originally published on 17 October, 2013 as part of our London Film Festival coverage.